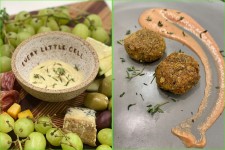 NEW YORK, October 27, 2020 (Newswire.com) -  Lab Farm Foods showcased the capacity of its cell-culture technology with a demonstration of three different prototypes on Friday, October 16. Unveiling two types of chicken nuggets and a pork liver pâté, the Manhattan-based startup announced its presence in the fast-growing industry of cell-based meat.

"While we believe cell-culture technology still has a ways to go before it produces a viable standalone product, we see the opportunity involving blended hybrid products as a way to make a more immediate impact on the global challenges we are trying to solve, while still offering consumers the same taste and nutrient profile they have grown to love," said COO Dave Schnettler.

The first nugget in the tasting demonstration was comprised of a 50:50 ratio of cultured cells to plant-based proteins, while the second was made from cultured cells combined with conventional ground chicken, also at a 50:50 ratio. One hundred percent of the liver in the pâté recipe was cell-cultured pork liver.

"We are proud of the fact that these nuggets were made from beautiful myotubes, the in vitro equivalent of muscle fibers, which we cultured using a serum-free medium in conditions mimicking natural skeletal muscle development," said CEO Tiziano Barberi.

"The hybrid nuggets made with the chicken cells were absolutely delicious! You never would have known that the nuggets were made out of 50% cultured cells," added Chef Stephanie Wright.