Serving their communities with compassion and care 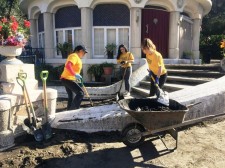 BURBANK, Calif., January 30, 2018 (Newswire.com) - Southern California Scientology Volunteer Ministers were alerted over the weekend to be on call. The National Weather Service warned that Santa Ana winds gusting to 55 mph in the mountains could set off a new round of fires in the beleaguered region. Teams of VMs who recently completed their cleanup of mudslides in La Tuna Canyon should expect to get back into action if needed.

Over the past several months, Los Angeles VMs have helped in the wake of Southern California fires, the Central Mexico earthquake, and Hurricanes Irma, Maria, and Harvey.

Most recently, hillsides burned by the massive La Tuna Canyon Fire in Burbank, California, were pummeled by heavy rainfall. The downfall saturated the scorched and loosened soil, creating rivers of mud that cascaded down on the communities below, sweeping away vehicles and trees. It also toppled power poles knocking out electricity in the area.

Streets were cleaned by city vehicles but residents were left with the task of cleaning up to three feet of mud out of their own properties. For those like 88-year-old Jeanette, whose home was one of the harder hit, this was an impossible task.

The Volunteer Ministers arrived in La Tuna Canyon as soon as the road was passable and were introduced to Jeanette who showed them the mud damage. The mudslide pushed her van 50 feet into the road. The VMs dug out her van and arranging AAA to tow it back to its original parking place. Then they cleared out the mud that prevented her closing her gate so her dogs could run around outside once more.

They dug out out another resident’s car, arranging a front loader to move large amounts of dirt and restore his hardpacked driveway. They cleared away mud and debris from a family’s garage and cleaned out their backyard so their son could go out to play.

They helped another resident dig a trench and place sandbags to protect the property from future rainstorms and mudslides.

The Volunteer Minister motto is that no matter how serious the situation, “Something can be done about it.”

In creating the Volunteer Ministers program, L. Ron Hubbard wrote, “If one does not like the crime, cruelty, injustice and violence of this society, he can do something about it. He can become a Volunteer Minister and help civilize it, bring it conscience and kindness and love and freedom from travail by instilling into it trust, decency, honesty and tolerance.” 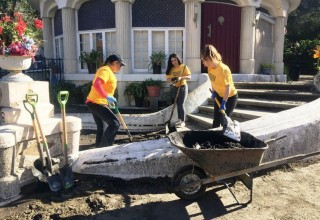 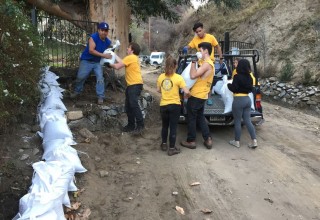 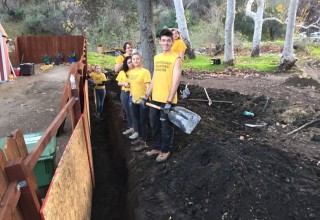 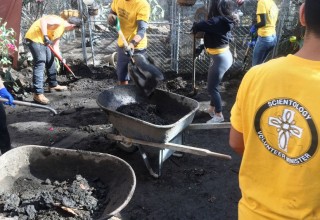