Krista Lewin Wilmoth's New Book "The Ember Egg" is a Fantastical Adventure of Three Siblings That Get Transported to a Magical Realm That Needs Saving. 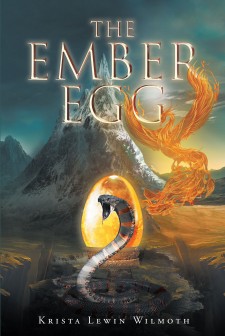 North Port, FL, March 7, 2018 (Newswire.com) - Krista Lewin Wilmoth, a happily married operating room nurse with a profound love of nature, has completed her most recent book “The Ember Egg”:  a striking story of adventure and whimsy that whisks three children away into a enchanted and extraordinary world of magic and wonder.

Published by Fulton Books, Krista Lewin Wilmoth’s book explores the lives of Eleven-year-old Wesley, along with his two little sisters Emma and Eden.  These three siblings had known nothing but heartache under the neglectful watch of a heroin addicted mother. Cold, hungry, and eventually abandoned, they are temporarily sent to foster care and then to their grandmother’s. Upon meeting their new eccentric grandmother, they find themselves transported to another realm of strange creatures after touching a forbidden glowing ember rock in Grandmother’s home.

When transported to the new realm called Ornithos, they encounter fun, quirky creatures that they have never seen before. Plants with faces on them, trees that transport pedestrians, butterflies that glow neon all thrive in Ornithos. There are half-bird, half-human creatures which are referred to as Orns who are full of love and positive energy. The three find themselves in true paradise where all inhabitants work together to take care and nurture each other. In the center of this utopia is a large egg that glows like burning embers. The egg provides energy to the city, heals the sick, and creates these half-human, half-animal creatures. When the egg is broken, it’s up to Wesley and his sisters to save Ornithos and its inhabitants.

Readers who wish to experience this engaging and whimsical work can purchase “The Ember Egg” at bookstores everywhere, or online at the Apple iTunes store, Amazon, Google Play or Barnes and Noble.

Bryan 'Nappy' Vereen's New Book 'Keep Telling YOUrself That!' is an Inspiring Book of Insights on Self-Worth and Care to Find and Fulfill One's Purpose
Fulton Books - Jan 13, 2020