Kids Want to Know The Truth About Drugs

Foundation for a Drug-Free World at Brighton Summer Fest 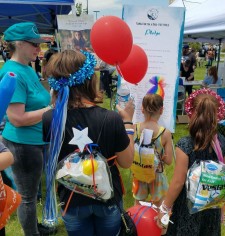 BRIGHTON, Colo., June 6, 2019 (Newswire.com) - ​​​​​​Teachers stopped by the Foundation for a Drug-Free World booth at Brighton Summer Fest to say hello and welcome the volunteers from the Church of Scientology Denver who have brought their drug prevention initiative to the festival for the past three years.

In their signature teal-colored T-shirts, the volunteers handed out copies of The Truth About Drugs booklets and educator packages for those wishing to learn to deliver drug education in schools or community programs.

Grandparents wanted copies of ​The Truth About Drugs booklets for their grandkids. Moms and dads brought their kids to the booth to have the volunteers talk to them about the dangers of drug use and abuse. Kids picked up copies of the booklets to share with their friends and signed the Drug-Free Pledge.

The annual summer fest is Brighton’s largest community event of the year. The foundation participates to help kids understand what drugs do to them physically and mentally so they can make the self-determined decision to live drug-free.

The Truth About Cocaine

Volunteers asked Brighton Police officers, “What drug are you seeing the most of on the street?” They were surprised that the answer was “cocaine.”

Foundation for a Drug-Free World publishes The Truth About Cocaine, which provides essential information about this drug:

“Today, cocaine is a worldwide, multibillion-dollar enterprise. Users encompass all ages, occupations and economic levels, even schoolchildren as young as eight years old.

“Cocaine use can lead to death from respiratory (breathing) failure, stroke, cerebral hemorrhage (bleeding in the brain) or heart attack. Children of cocaine-addicted mothers come into the world as addicts themselves. Many suffer birth defects and many other problems.

“Despite its dangers, cocaine use continues to increase — likely because users find it so difficult to escape from the first steps taken down the long dark road that leads to addiction."

The Truth About Drugs initiative of Foundation for a Drug-Free World provides fact-based drug education to help youth avoid the tragedy of drug abuse and addiction.

“Drug education is one of the most powerful prevention tools available,” said Patricia Ross, the group’s Colorado coordinator. Anyone wishing to find out more or to get complimentary copies of the drug education booklets and videos or the foundation's drug education curriculum and educator’s guides should contact the Church of Scientology of Denver, which sponsors the foundation in Colorado.

Humanitarian and Scientology founder L. Ron Hubbard observed that “the single most destructive element present in our current culture is drugs.” Foundation for a Drug-Free World is the world’s largest nongovernmental drug education program. The Church of Scientology and Scientologists support Foundation for a Drug-Free World and make its drug-education materials available free of charge to anyone wishing to help their family or take action to stop the epidemic of drug use and abuse.

For more information, watch The Truth About Drugs — Real People Real Stories on the Scientology Network.

Tags: cocaine, Foundation for a Drug-Free World, Truth About Drugs