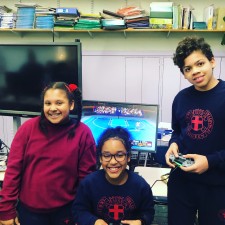 As esports continue to grow in popularity worldwide, KING has developed an innovative program to coach students in the esports games of NBA 2K and FIFA and then transfer those skills onto the court and field. Each practice involves a physical activity to get kids moving and connect them to video games in a new and unique way. The hybrid-model approach is designed, in part, to help engage kids who otherwise may have lacked the confidence, interest or ability to play a traditional team sport.

"At KING, our core belief is that kids should be on the field, in the gym and at the park and we always look for ways to evolve our programs to reach more students,” said Matt Murphy, CEO of Kids in the Game. “Sports are an undeniable vehicle for youth development and we feel a responsibility to design creative programs that connect with more kids through sport. With the new esports league, we're excited to engage with students who may not have had the confidence or opportunity to be a student-athlete.”

The KING esports program will hold practice twice per week for nine weeks. Each session will involve virtual and physical games, with the program culminating in a four-school finals tournament. To help connect the program to the esports world, KING is excited to work with the New York Excelsior Group (NYXL). NYXL participates in the professional Overwatch League with 19 other teams worldwide. As the first professional esports franchise to represent the city of New York, NYXL brings a wealth of knowledge in the esports space that will be critical in helping KING launch the successful program. Over the past few months, NYXL has hosted a variety of community events and activations in New York City, including high school and collegiate gaming tournaments at the team’s pop-up shop and gaming center in Brooklyn. The franchise has a focused mission in 2019 to build a community around esports in New York City and engage with and educate young people on opportunities that exist within the industry.

About Kids in the Game

Kids in the Game (KING), based in New York, is a leading provider of sports-based youth development programs, including summer camps, travel teams, after-school enrichment, recess support programs and physical education. KING believes in the power of sport, creativity and play to empower youth.

New York Excelsior (or "NYXL") is the first professional esports team to represent the city of New York. The franchise is one of the founding members of Activision Blizzard’s Overwatch League, which launched its inaugural season in January of 2018. NYXL is owned and managed by Sterling.VC, the venture capital fund supported by Sterling Equities.

For inquiries, please reach out to:

Source: Kids in the Game