Kids Help Kids (And Adults) Learn the Truth About Drugs

In the midst of a nationwide drug abuse epidemic, youth reached out with factual information on drugs to the crowds in San Francisco. 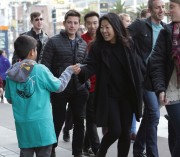 San Fracisco, CA, February 14, 2016 (Newswire.com) - A team of passionate drug-prevention activists descended on San Francisco’s Embarcadero throughout the week leading up Sunday, spreading the word to thousands about the tragedy of drug addiction.

Among them were a group of young volunteers passing out thousands of copies of The Truth About Drugs to the crowds who flocked to San Francisco to attend the many events and concerts in town.

These volunteers play an important role in a strategy endorsed by the White House Office of National Drug Control Policy, which describes drug prevention as “the best approach to reducing the tremendous toll substance abuse exacts from individuals, families and communities.”

The importance of this initiative is underscored by a 2012 study on adolescent drug and alcohol consumption that found:

§  78.2% of adolescents had consumed alcohol

§  42.5% of the oldest teens had experimented with drugs and

§  16.4% of the oldest teens were classified as drug abusers.

According to the United Nations Office on Drugs and Crime 2015 report, there were 187,100 drug-related deaths in 2013. The report cites studies that show the earlier one begins experimenting with an illicit substance the more likely they will become addicted, and that youth exposed to drug prevention consumed illicit substances less often and less intensively.

Furthermore, a national survey of teens 12 to 17 by the Substance Abuse and Mental Health Services Administration (SAMHSA) shows that teens who believe their parents would strongly disapprove of their substance use were less likely to use substances than others.

And according to SAMHSA Administrator Pamela S. Hyde, “Parents need to initiate age-appropriate conversations about these issues with their children at all stages of their development in order to help ensure that their children make the right decisions.”

These were some of the reasons the volunteers are so committed to get drug education materials into the hands of young people, parents, mentors and anyone wishing to help youth avoid the tragedy of drug addiction.

Scientologists on six continents work in their communities throughout the year to empower others with the truth about drugs.​