Kickstarter Launches "Hair to the Throne" on Inauguration Day at 8:30AM EST 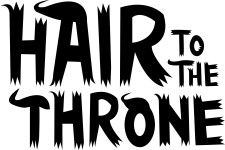 While the initial funding goal is only $1, the Kickstarter’s stretch goal is to raise $2,864,974—one dollar for every vote representing the popular vote margin in the 2016 presidential election. The money raised will support the production of our 12-episode first season starring “The Hair.” Each of the creators have their own unique motivation for participating but they are all united in their belief that humor can move us forward.

While the initial funding goal is only $1, the Kickstarter's stretch goal is to raise $2,864,974—one dollar for every vote representing the popular vote margin in the 2016 presidential election.

“I don't know Donald Trump personally but, I have watched a lot more of him lately as he has campaigned for, and then somehow won, the Presidency of the United States. I got to thinking there MUST be a different side to him. There must be some sort of good in this guy somewhere. Right? Then it hit me—maybe the last bastion of compassion has been squeezed into The Hair. What if The Hair was alive? What if he could walk and talk? What if he was tasked to provide some sort of counterbalance of decency and good to this seemingly awful person? Why not make a cartoon about it that makes people laugh and think about what we can do to move forward?” – Ferris Plock, Hair To The Throne Co-Creator & Day Dreamers Limited Co-Founder

“My family comes from a line of pioneers, military men and women, and even a state representative and legislator. I have a profound respect for anyone involved in public service because I know just how impactful their countless sacrifices are. That’s why I feel so deeply hurt by the amount of hateful and disrespectful speech being thrown around regarding Americans of all types. I want our children to grow up in a country where they can be confident in being themselves, but I fear that our country is moving in the opposite direction, which nearly paralyzes me...but instead we are able to respond through humor, creativity, intelligence, and intent.” – Kelly Tunstall, Day Dreamers Limited Co-Founder

“We took a water cooler idea and are turning it into a movement about democracy. This is not just a show about cheap laughs and making a mockery of our President. The overarching theme is really about the bipolar but symbiotic relationship that President Trump has with The Hair. Both are embodiments of the huge divide that has come between the citizens of our great country. Regardless of one’s political affiliation, it’s important to remind all Americans that their civic duty doesn’t end with just checking a name on a ballot.

I am a first generation Asian American, from a small Midwestern town, and my wife is a first generation Hispanic American. We are raising our family in San Francisco, a city that has shown me how important it is to understand the goodwill and intentions that come from all sides of the political spectrum. Our hope is to create a conversation that dissolves the lines of partisanship. We are the United States of America and we all need to start acting that way.

This Kickstarter campaign isn’t just about raising money. We’ve already committed our studios’ financial resources to produce the pilot episode. An overwhelming number of voters, 2,864,974 to be exact, felt their voice was not heard. This is really about the symbolic gesture of adding one more voice of support to the majority that were silenced on election day. Our greatest hope is that The Hair will grow from a fictional show to a very real and accountable conversation with our President of the United States.” – Howard Cao, Hair To The Throne Co-Creator, Day Dreamers Limited Co-Founder, and The Ringleader at Form & Fiction.

Day Dreamers Limited is a partnership committed to the belief that our dreams don’t need to be separated from our day job.

Form & Fiction is an independent brand, content and creation studio, built on the heritage of crafting visual excellence.

Day Dreamers Limited is a partnership committed to the belief that our dreams don't need to be separated from our day job.