Kate Tavegia's New Book 'Hunter's Tales: The Imps' Curse' is a Mystical Tale of a Band of Heroes on a Journey to Thwart a Growing Menace in the Horizon 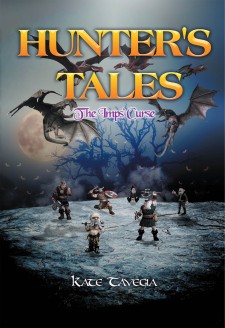 BILLINGS, Mont., July 8, 2020 (Newswire.com) - Kate Tavegia, a dedicated writer, coal mine lab tech, and employee at Stillwater Mining Company, has completed her most recent book “Hunter’s Tales: The Imps’ Curse”: an electrifying novel about a small group of extraordinary individuals who travel the land, sea, and air to battle dark instigators and malevolent entities.

Kate writes, “‘Hunter’s Tales: The Imps’ Curse’ is a story within a story. An old man whom everyone calls Hunter is telling the tale of one of his adventures to a small crowd on a stormy day. This story is one of his earliest adventures. It begins when a bedraggled young dwarf named Ryder arrives at the Guild College with a plea from her father for aid against a dragon that a group of his warriors stumbled into. Along with his best friend, Tamra, and the powerful mage Sariah, he accompanies Ryder back to her home.

"Throughout a journey that takes them through land, sea, and even air, the small group encounters hidden foes, unexpected friends, and dangerous, hidden lands. Meanwhile, a rebellion is afoot in the dwarven kingdom. The loyal survivors of a coup are forced to flee into the deep tunnels underneath the dwarven capital city.

"Unaware of this violent transfer of power, the group continues south. Through a strange twist of fate, they join up with the rebel dwarves and other allies to free the rest of the dwarves from the grip of a cruel tyrant. Will they succeed in their endeavors and oust the usurper to instill the rightful heir to power, or will they all, friend and foe alike, be consumed by an unknown power that none of them know exists?”

Published by Fulton Books, Kate Tavegia’s book is an exciting and thrilling masterpiece filled with magic and virtues of unity, friendship, and strength in times of overwhelming adversity.

Follow the astounding journey of a group of heroes in a quest to end a looming evil waiting to upheave a peaceful realm.

Readers who wish to experience this mesmerizing work can purchase “Hunter’s Tales: The Imps’ Curse” at bookstores everywhere, or online at the Apple iTunes Store, Amazon, Google Play or Barnes & Noble.

Glen R. Reed Jr.'s New Book 'From the Inside Looking Out' Unravels a True Account of Life Inside the Penitentiary
Fulton Books - Aug 3, 2020

Henry Beyer's New Book 'One Knight's Life' is a Profound Read That Stands Up to Many Facets of Today's Beliefs
Fulton Books - Aug 3, 2020