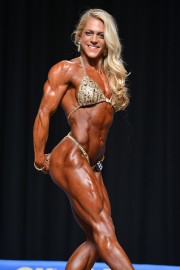 Palm Beach Gardens, Florida, February 11, 2016 (Newswire.com) - Following on the heels of a successful 2015 athletic season that saw Secor crack the top ten at several fitness competitions and earn recognition as FitGem’s “Breakout Amateur Womens Physique Competitor of the Year” and “Most Improved Amateur Competitor” along with “Voters’ Favorite Amateur Competitor” and “Amateur Competitor of the Year” from the Promoting Real Women Awards, Secor will take the stage as an IFBB Professional in 2016 with the goal of competing alongside the very best and winning in the world spotlight! Coach Jose Mendieta, who helped Secor earn her professional card, will also coach Secor through her pro debut, while Jodi Lyons will choreograph her posing routine. Secor will wear a custom suit by Mick Sousa Competition Wear in her professional debut.

“I am aggressive in everything I do,” said Secor about her journey to professional fitness status and her pro debut. Secor continued, “I’m aggressive in my training, I set aggressive expectations for myself and I set aggressive goals. You have to push yourself hard because no one else will!” A small business owner and tournament paintball competitor with Team Destiny, which she captains, Secor owns and operates Exotic Tan, a salon in Long Beach, California.

By 2014, Kat Secor took home her first Physique gold trophy, placing first at the Jay Cutler Classic in Boston, Massachusetts. After qualifying on the national level, Secor developed an insatiable hunger to earn her Pro Card and compete on the Olympia stage! Completing 2014 with a fourth place finish at the North American Championship in Pittsburgh and a seventh place at the National Bodybuilding Champion in Miami, Secor continued her pursuit of her coveted Pro Card in 2015, where she took third at the USA in Las Vegas and eighth at the North American Championships before earning her Pro Card with a second place showing at the Miami National Bodybuilding Championship in November, 2015.