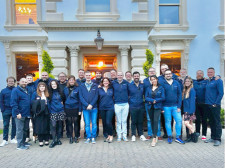 New research* from Kadence (formerly Chargifi) has revealed that after a year of flexible working, almost two-thirds of U.S. and UK office workers (62%) now feel more trusted to do their job effectively. Of those workers, half also feel more motivated to do a better quality job (51%) and go the extra mile (48%) thanks to their new working arrangements.

Kadence is a hybrid working platform that coordinates people, places, and projects to help employees be in the right place at the right time with the right people - to get their best work done. Kadence believes that the future of work lies in finding a rhythm that works for both employers and employees, which is why their product gives people the power to choose when they work, where they work, and who they work with.

In charging ahead tirelessly to build the future of work with a resilience that only a mid-pandemic pivot could fuel, Kadence has grown from 0 to 300 customers in the last 18 months, from governments to fast-growing tech unicorns like Collibra and Starling Bank. Kadence has also helped companies reduce expensive office space by 68% while also increasing the number of employees coming into the office to collaborate by 25% month over month. Recently, a Kadence customer received an ESG award because of the positive environmental impact of how they do hybrid.

"Never before in history have humans changed how they work at such a scale and in such a short space," says Nick Bloom, a new Kadence investor. "There is no doubt hybrid is now the way the world is going to work going forwards, and Kadence has honed in on the most important aspect of hybrid—that hybrid should enable better outcomes for companies as a whole, not just facilities managers. Their focus on the coordination of people is where the market is heading."

"Companies around the world are reimagining the way they work," says Cal Henderson, Co-Founder, and CTO at Slack and a new Kadence investor. "And as the world goes hybrid, it's important that teams find a rhythm for meeting in person for collaboration and creativity. Kadence is important in helping companies make hybrid work, and I'm excited to be involved."

Kadence is a Hybrid Working Platform that coordinates your people, projects, and spaces.