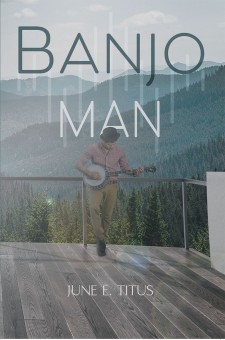 THOMASVILLE, Ga., June 24, 2020 (Newswire.com) - ​June E. Titus, a retired nurse, writer, poet, banjo picker, and artist, has completed her most recent book “Banjo Man”: a gripping and potent fiction that tails the life of Susan, a woman who will soon find out that the world and the name she was living was more than what it is as truths start surfacing and life-changing events occur.

June writes, “Banjo Man tells the story of Susan Willson Reese, a widow, retired schoolteacher, and accomplished bluegrass and old-time banjo picker. A native of the fictional community of Willson’s Cove in the North Carolina mountains, she has been trying to find one of the many handcrafted fretless banjos her grandpa, Luther Willson, built back in the early 1900s. Her quest has been a twenty-year search of futility. Grandpa had been a well-known luthier and musician in the mountains of North Carolina, building fiddles, lap dulcimers, and fretless banjos from the early part of the twentieth century until he died in the 1950s. Before World War I, he began taking them by train to St. Petersburg, Florida, and selling them, leaving his wife and several children for weeks and even months at a time. When Susan meets Dr. John “Mac” McBride, a romance follows, and she becomes Mrs. McBride. While on their honeymoon, she finally stumbles on one of Grandpa’s banjos along with the banjo’s owner, the accomplished banjo picker and singer Harry Harvey. This discovery opens a whole new can of worms: scandals, identity issues, secrets unveiled, and more. Susan learns that life, as she has known it, has been built on deception. Suspicions, denials, searches in dusty attics, and secret stashes bring the large Willson clan to a new understanding about their history. Not only is Susan’s entire life challenged, but she comes face-to-face with her own need for the faith she has set aside over the last several decades. Are her questions about her identity ever resolved? Will these events destroy a close-knit mountain clan? Banjo Man introduces a full cast of mostly senior citizens, including nursing home residents, Susan’s Aunt Carrie and others, who are intricately involved in Susan’s drama.”

Published by Fulton Books, June E. Titus’ book is a thrilling journal that accounts the life of a woman as she discovers the hidden truths of her clan. Throughout tales of suspicion, lies, identity, the readers will find this work fascinating and surprising.

Readers who wish to experience this brilliant work can purchase “Banjo Man” at bookstores everywhere, or online at the Apple iTunes Store, Amazon, Google Play or Barnes &  Noble.

Mike Curry's Book 'In the Arena' is a Captivating Story of Challenges, Personal Battles, and Adventures in Both War and Peace
Fulton Books - Jul 24, 2020

A. Smith's New Book 'To Defy a Duke' is an Intriguing Tale of Mystery and Mistaken Identity That Yield Connivances and Danger in a Woman's Life
Fulton Books - Jul 23, 2020