BROOKHAVEN, Miss., October 13, 2020 (Newswire.com) - Jumpstart Test Prep announced the selection of 31 Mississippi High Schools that will implement a legislatively funded test prep program to juniors preparing for the state mandated ACT® exam administered during the spring of 2020. The prep classes will begin at all selected Mississippi high schools a few weeks preceding the scheduled test day. The pilot program is funded through a $175,000 allocation from the Mississippi Legislature and will support approximately 4,100 juniors in improving their ACT test scores during the 2020-2021 school year.

Working in conjunction with the Mississippi Department of Education (MDE), through the Office of Secondary Education, the goal of the 2020-2021 Mississippi legislative pilot is to assist teachers at the selected high schools with improving ACT composite English sub-score averages, as well as gain feedback and improvement results from schools awarded the review course pilot.

In May 2019, Jumpstart Test Prep announced the results from 15 Mississippi High Schools that completed the first, State-sponsored Math review for nearly 1,700 juniors preparing for the state administered February 2019 ACT® exam. Following completion of the Jumpstart Test Prep review, nearly half of the students with prior ACT attempts had an average Math score improvement of +2.24 points. In June 2019, ACT® English improvements were announced following a study conducted at 6 Mississippi High Schools. The study showed over 57% of the students had an average ACT English score improvement of 3.15 points over their best prior attempt. In June 2020, even higher improvement gains were announced for ACT science and reading subject areas.

"I was excited for my scholars, staff, and school to learn that our application had been chosen for this pilot program," said Torrey A. Hampton, principal of Forest Hill High School. Forrest Hill was one of the schools awarded the Jumpstart ACT science and reading prep pilot in the 2019-20 school year. "My team and I worked to create an implementation plan that worked well within our master schedule. After the first day of review, scholars had very positive comments about their experience. They liked the videos and strategies that were provided. This program gave our school community a chance to promote and build excitement for the ACT in our school even more. More than half of our students realized gains over their best prior scores, averaging over 3 point improvement in both subject areas."

Jake Hoskins, Ph.D., of Westminster College in Salt Lake City, was selected by Jumpstart Test Prep to analyze the pre- and post- ACT exam scores provided by each school last year and continues in this capacity for the 2020-21 school year. His analysis revealed that the Jumpstart ACT review produced discernable and consistent improvement at the individual school and global analysis levels. Improvements were consistently seen across student demographics (race, gender, academic strength) and school rating. When optimally implemented, the review program proved the ability to drive several point score improvements to school averages and drastically improve ACT exam results.

"To again validate the effectiveness of Jumpstart Test Prep's review program, a field experiment is designed for implementation prior to the 2021 statewide administration date (Spring 2021) of the ACT® exam for High School Juniors," said Hoskins. "This extensive field study that is planned for 2020-21 builds upon a similar set of trials that was conducted for the past two academic years that clearly demonstrated effectiveness of the program in all subject areas."

This year, to be considered for participation, all Mississippi public high schools were allowed a two-week application registration period which concluded Sept. 18. 109 schools representing over 13,600 juniors submitted applications before the deadline and Dr. Hoskins performed a random selection from the field of applicants.  "Comparing 2019 state published junior class ACT performance data, the randomly selected group that will administer the Jumpstart Test Prep English program this year performed nearly 1 point below the junior class state average on the ACT English subtest last year (16.08 VS 17).  Nearly 55% of this years' school pilot group performed lower than the 2019 statewide school junior class ACT composite average of 17.6. 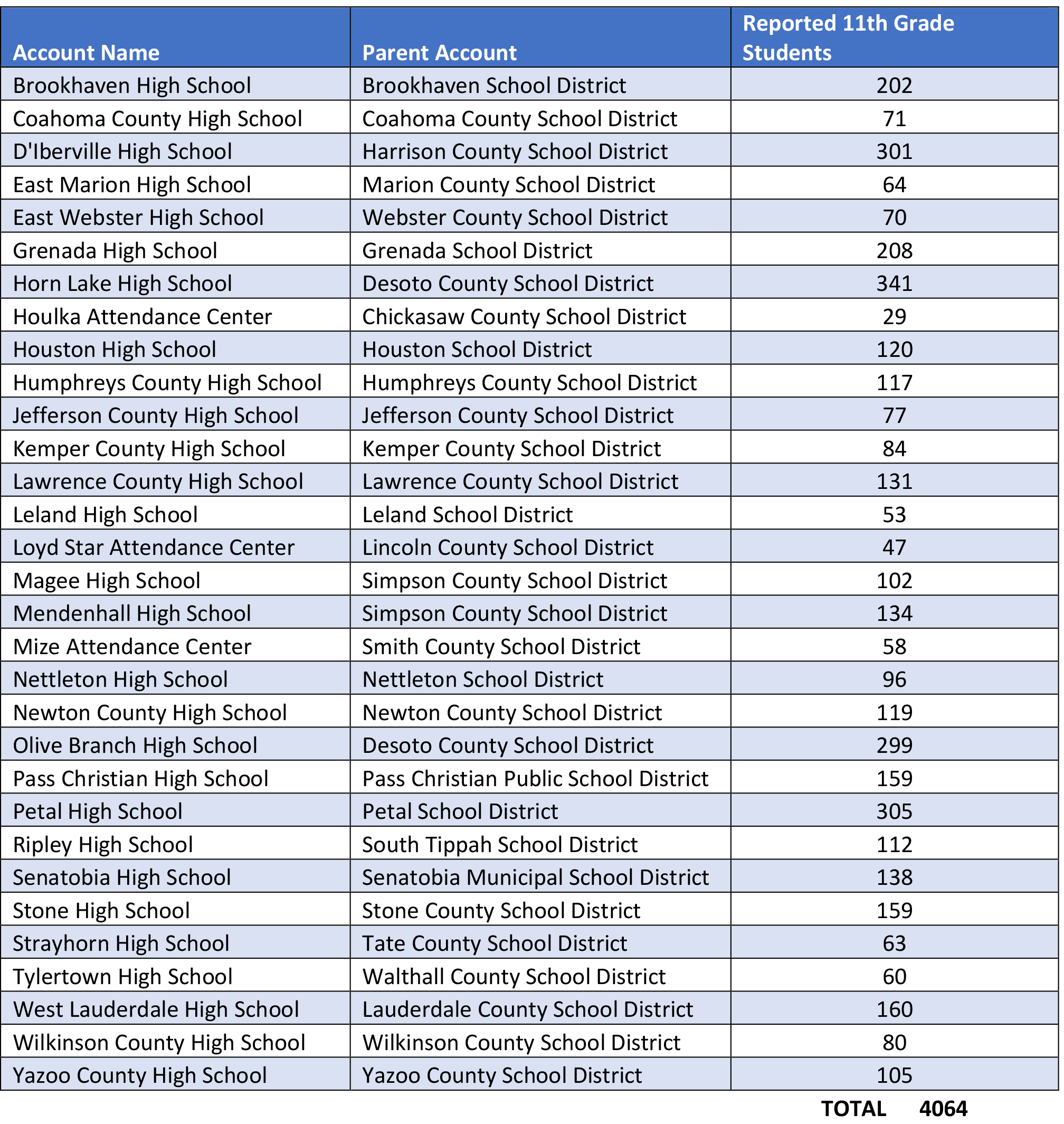 "A faculty orientation will be provided at all participating schools and student workbooks will also be delivered. Access to the Jumpstart Test Prep English materials will be instructed to be released after the national ACT test date in December 2020 to allow more juniors the opportunity to complete at least one ACT® exam attempt prior to utilization of the test prep materials," said Sha Walker, Co-Founder & CEO of Jumpstart Test Prep. "As of today, the selected schools report 22% or 884 of the total students in the study have at least one prior ACT exam score for post implementation improvement comparison."

"As with prior studies, we expect major improvements when Jumpstart Test Prep's English prep is properly implemented for these students as well as much higher performance for those with no prior score than they would have scored otherwise." Jumpstart Test Prep's unique preparation approach helps students of all ability levels stay fully engaged and gain the most improvement in the shortest time by explaining difficult content in a way that every student can follow and understand. "Most of us are visual learners. Our review is a highly visual product designed to capture the students' attention and combined with our workbook allows students to actively participate as they watch our online video review. Our new English and math assessments link students back to their weakness areas reviewed in the Jumpstart module content, minimizing the time needed to prepare, while maximizing score improvement," Walker concludes.

The company has constructed a program based on over 40 years of work by Mississippi's 19-year STAR teacher hall-of-fame inductee; the legendary educator and tutor Dot McClendon.  Its consistent quality, prestige and innovation is a culmination of her lifetime experience. "I am thrilled by the teacher feedback and the success of our Mississippi High School students using our Jumpstart Test Prep review," said McClendon. "Opening the door to higher learning for students who may never have been accepted, or able to afford college on their own feels very rewarding in itself."

The company has found that when students are coached the right way, they can quickly secure significant gains, regardless of their initial proficiency in the subject area.

The 2020-21 pilot program provides the following resources for students and teachers:

The ACT® was first introduced in 1959 by Everett Franklin Lindquist, a University of Iowa professor as an alternative to the Scholastic Aptitude Test (SAT®). The test, in its current form, is currently administered by ACT®…a nonprofit of the same name. The ACT has seen a gradual increase in the number of test takers since its inception, and in 2011 the ACT® surpassed the SAT® for the first time in total test takers; that year, 1,666,017 students took the ACT® and 1,664,479 students took the SAT®.

Jumpstart's streaming video modules are delivered on-demand, and are designed for classroom integration or individual study. Jumpstart's methodology is proven to help students of all ability levels stay fully engaged and gain the most score improvement in the shortest time by explaining difficult content in a way that every student can follow and understand. Each module reviews the must-know content, includes testing strategies specific to the exam, and concludes with realistic question practice.