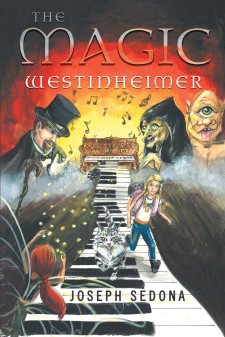 New York, NY, April 13, 2017 (Newswire.com) - Joseph Sedona, a gifted writer and author, has completed his most recent book “The Magic Westinheimer”: a delightful and unique tale of a young girl who happens upon the most extraordinary piano in her new home.  Aided by a host of amusing characters, the girl adventures into enchanted realms, only to discover her true self.

Published by Fulton Books, Joseph Sedona’s book is a story is told in four parts. Early in the book, Sedona introduces readers to the German woodcutter who crafted the most extraordinary piano in 1888 and to a 20th century magician who used the instrument in his act. But it's not until young Laurel, the heroine of the story, arrives on the scene that the story truly begins to take shape, and oh, what a tale.

A surprise awaits Laurel and her parents when they move into their new Lakeland, Florida home. Tucked away in a storage shed behind the house is an antique piano. The instrument is promptly promised to Laurel as an early present for her 10th birthday. Initially, she's less than thrilled with the development. After all, accepting the gift means her parents will likely pressure her into continuing piano lessons--a chore Laurel thought she'd left behind in North Carolina. But when an impromptu concert throws the neighborhood into chaos, Laurel discovers that the piano is enchanted.

Along with a talking cat, Tatanka, and her ferret, Houdini, Laurel uses the instrument to transport herself across time and space. She learns about the piano's history through her travels and connects with Daff, a fast-talking fairy. But as Laurel learns more about the piano's past, she's also exposed to the dangers posed by the extraordinary instrument. Can she use magic to right past wrongs? Or will the piano's powers fall into the hands of evil forces?

Readers who wish to experience this clever and refreshing work can purchase “The Magic Westinheimer” at bookstores everywhere, or online at Barnes and Noble, iTunes, Google Play, or Amazon.