Late last year John Galt Solutions announced they were accepting applications for their bi-annual scholarship. After receiving an overwhelming number of applications it was narrowed down to a select few, which were presented to the John Galt Staff who chose Marie Ozenua as the winner. 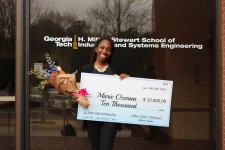 DALLAS, February 27, 2019 (Newswire.com) - Late last year John Galt Solutions announced they were accepting applications for their bi-annual scholarship. After receiving an overwhelming number of applications, it was narrowed down to a select few, which were presented to the John Galt Staff who chose Marie Ozenua as the winner.

This $10,000 scholarship is aimed at supporting the next generation of expert forecasters and supply chain leaders who show a strong commitment to their career in one of these fields and Ms. Ozenua met those qualifications with admirable ease.

Sibling to two brothers, Marie is a Nigerian born demand planner in the making. While in the 10th grade, her father persuaded her to chose sciences over her first love, the arts, and she has not looked back. After contemplating several American universities Marie chose Georgia Tech.

“I chose Georgia Tech because I had heard about its reputation for being one of the best engineering schools in the country,” Marie Ozenua said. “And at the time, I wanted to be a Computer Engineer.”

She later goes on to admit, “The artist in me couldn’t help but love the black and gold of Georgia Tech.” After a brief stint in what she thought would be her major, Marie decided to go in a different direction, switching to Industrial Engineering. This proved to be an easier decision that she thought, expressing, “I picked Industrial engineering because of its focus on math and efficiency. As a young girl, I always knew I wanted to help people, but I wasn't sure how. As an industrial engineer, I can help make systems and designs more efficient so work can be done faster and easier.”

Having the dream as a young girl of helping people having not left her mind, she began finding a way to implement that desire in her new field.

“As a supply chain engineer, I can design supply chain systems that would get essential products to consumers faster. This was a dream come true for me because it allowed me to see how I could use my skills to solve one of the most pressing problems facing those back home in Nigeria and in so many countries around the world - How do we get essential products (food, medicine, clothes, etc.) to people that need them the most, and in the fastest and most efficient way possible?”

It was statements such as this that cemented the decision of the John Galt staff; Marie Ozenua was, without a doubt, the correct recipient of the scholarship. “Her dedication to improving herself as a person was obvious from the start, but it was her dedication to improving the world that drew us to her,” said one staff member. “It was very obvious to all of us that she had a plan to use her education, and soon to be career, to better the lives of others.”

When asked about her goals, Marie did not disappoint reinforcing what the John Galt staff told us, saying, “My goal as a supply chain engineer is to design networks and systems that developing countries around the world can use to better understand their resources and capacity and provide more for the people that live in those countries.” If was very clear from start to finish that this year’s scholarship was going to someone who not only deserved it but was going to use it in a manner that could truly change the world.