Abuse groups, Jewish leaders to stage coordinated protests at Whole Foods in NYC and LA on May 25 -- to coincide with the chain's first 365 store launch in SoCal. Nonprofits SNAP (of Spotlight film), Peaceful Hearts Foundation (founded by Matthew Sandusky, adopted and abused son of Penn State pedophile Jerry Sandusky) and NAASCA to join Jewish leaders to protest Whole Foods co-CEO John Mackey's ties to Marc Gafni, former rabbi with "a troubled past," as reported by The New York Times. 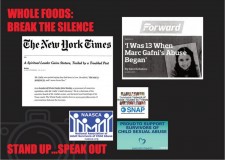 Whole Foods' public statement, "there's nothing else to say on this matter" could not be more incorrect. For far too long we have allowed child sex abuse to remain in the shadows of silence. Perpetrators groom their victims into silence and society has reinforced that silence. John Mackey and the Whole Foods Market Board of Directors have an opportunity to reach millions with an important message.

The protests are in response to Whole Foods co-CEO John Mackey's link to spiritual leader Marc Gafni, a former rabbi with a "troubled past," as reported by The New York Times in December:

"A co-founder of Whole Foods, John Mackey, a proponent of conscious capitalism, calls Mr. Gafni 'a bold visionary.' He is a chairman of the executive board of Mr. Gafni's center, and he hosts board meetings at his Texas ranch."

After The Times story broke, Rabbi Ingber led a petition drive, co-authored by more than 100 rabbis and Jewish leaders, demanding that Whole Foods sever ties with Gafni, citing "many, repeated and serious allegations, both public and private, former and recent."

Sara Kabakov came forward publicly for the first time in her opinion piece in The Forward: "I Was 13 When Marc Gafni's Abuse Began." Mackey has been widely criticized by experts in business, academia, and survivors' advocacy work (see attached PDF).

Mackey's only statement, posted on his Whole Foods Market blog, says his affiliation with Gafni is "strictly a personal relationship," and includes a link to their 7-part video dialogue on Gafni's website. Whole Foods has made a parallel statement on Twitter and Facebook, defining Mackey's relationship with Gafni as "his personal business." According to a report in the Forward, a spokesman for Gafni said, "There was no break between Mackey and Gafni."

A spokesperson for Whole Foods Market emailed: “John no longer serves on Mr. Gafni’s board and has no connection to the Center for Integral Wisdom. That being said, there’s nothing else to say on this matter.”

But leaders working to eradicate child sexual abuse think Mackey needs to say more. Survivor, author, and advocate Nikki DuBose wrote in The Huffington Post, "It’s no secret that survivors live in silence, and society has a responsibility to help end that."

"[Matthew] Sandusky plans to attend a May 25 protest [at Whole Foods] in Manhattan in support of two women who say they were sexually abused as teens by one-time rabbinical student Marc Gafni. 'It’s obviously something I feel strongly, passionately about, to be there in person,' Matt Sandusky said. 'I love the opportunity to be there and help out.'"

"Next Wednesday, on the Upper West Side, I will stand in solidarity with the innocent, underage victims of sexual abuse, and stand against those who support and cover-up that abuse. Young girls were abused by Marc Gafni, and Whole Foods CEO John Mackey and others like him have refused to distance themselves from Gafni, supporting him and providing cover for his predation."

David Clohessy, Executive Director of SNAP, from their press release:

"We disagree with the public relations staffer who claims 'there's nothing else to say on this matter.' If you've hurt people, distancing yourself from a wrongdoer isn't enough. You have a moral duty to do more. We hope to see tangible helpful action by Mackey very soon to lessen the harm he has caused by his irresponsible affiliation with and support for an admitted sex offender."

"As a community, we need to bring light into the shadows of the taboo issues of child sexual abuse -- we must expose institutional enabling to stop the silence and change the culture. Instead of stepping out of this discussion, Whole Foods should publicly step up to the plate by taking a responsible corporate stand against child sexual abuse as soon as possible."

"Whole Foods' public statement, 'there's nothing else to say on this matter' could not be more incorrect. For far too long we have allowed child sex abuse to remain in the shadows of silence. Instead of maintaining the societal norm of silence around these issues, I would like to see them take a stand against child sexual abuse publicly -- to take a leadership role in getting the message across that we can no longer remain silent."

About NAASCA (National Association of Adult Survivors of Child Abuse)

Open Letter to U.S. Labor Secretary Tom Perez From NAASCA, Advocates: Change the Culture of Sexual Violence
Advocates for survivors of sexual assault, including Matthew Sandusky, son of Jerry Sandusky, urge Perez to "change the culture" in his speech at Conscious Capitalism in Austin this week. Open Letter RE: Whole Foods CEO, Conscious Capitalism founder John Mackey's support of alleged sex abuser Marc Gafni who described one of his accusers: "She was 14 going on 35," as first reported by The NY Times.
NAASCA (National Association of Adult Survivors of Child Abuse) - Oct 17, 2016