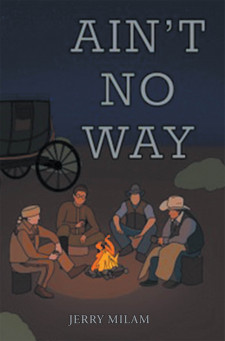 NEW YORK, November 16, 2020 (Newswire.com) - Jerry Milam, an excellent writer, has completed his most recent book "Ain't No Way": a gripping and potent read that follows John who found himself in the middle of a spontaneous trip to California together with people he met on stage. Will they all get through this long journey?

Jerry writes, "John Duvale, a recent widower, got on a stagecoach in St. Louis to return to his home in Green River, Wyoming. The people he met on the stage were talking of a trip to California. The more they talked, the more he was persuaded to go along. It became a snowball effect. Two brothers, who were on the same stage, also decided to go along.

As the story begins, they were making camp in the woods. They had exchanged their stagecoach for two covered wagons. They were going out on their own to California. With little knowledge of the lay of the land, and the added responsibility of two women along, the journey was not going to be a walk in the park. Along with some unexpected friends, a few complications arose. Would everything work out for the best? Maybe, maybe not."

Published by Fulton Books, Jerry Milam's book takes the readers on an interesting journey full of surprisingly unexpected adventures as a group sets off for California and encounters several challenges along the way to their destination.

Readers who wish to experience this riveting work can purchase "Ain't No Way" at bookstores everywhere, or online at the Apple iTunes store, Amazon, Google Play or Barnes and Noble.