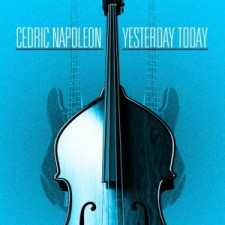 Yesterday Today is Napoleon’s first solo album and represents a new beginning for the renowned jazz bassist, an opportunity to interpret the songs that have inspired him throughout his long musical journey.

"Soul is the feeling of the spirit and jazz is the access to it."
Cedric Napoleon

“This is a long time coming,” says Napoleon. “I’ve been thinking about arrangements on these songs for quite a while. Now I’ve finally got the chance to put them down on wax and hopefully have others feel the same way about these songs as I do.”

For more than five decades, Cedric Napoleon has dedicated his life to engaging in a conversation with the music.  As a founding member of the influential jazz ensemble Pieces of A Dream, Cedric has performed at major venues all over the world. Once the principal bassist for Grover Washington, Jr., Cedric has recorded for Elektra, Manhattan and Blue Note Records, and over the course of his career has collaborated with music legends including Miles Davis, Dizzy Gillespie, Patti LaBelle, Stevie Wonder and Teddy Pendergrass.

Encompassing an eclectic array of styles and moods, Napoleon has chosen melodies that transcend genre. At the heart of each selection is a devotion to groove; the songs emphasize Napoleon’s lithe, sinuous basslines, on both the upright and electric bass, and the joyful energy of the performances reflects his genuine love for the material.

“I believe a great melody can be played in any style or rhythm,” says Napoleon. “That’s always been the way I hear music. I was seeking an opportunity to express my musical versatility through the music of yesterday and today and these are the songs that made my spirit reach out.”

Yesterday Today reflects Napoleon’s personal experiences and charts a path from his early development as a musician and formal jazz training to his love for classic R&B and soul. Under producer Donald Robinson’s guidance, and featuring contributions from both Joey DeFrancesco and Najee, each selection is imbued with Napoleon’s signature “Jazz-Soul” flavor.

“Soul is the feeling of the spirit and jazz is the access to it,” explains Napoleon. “This album has a beautiful spirit, but more importantly I believe we did the songs justice.”

Still, Napoleon says the song that means the most to him is the album’s final track, an original piece titled “Cedric’s Groove,” which reflects where he would like to take his music in the future.

“The title of the album is Yesterday Today, but there is a ‘Tomorrow’ implied, I believe, because there’s always a future,” says Napoleon. “That’s what 'Cedric’s Groove' is all about: tomorrow.”