Jack Flynn's New Book "Imaginary Conversations With Famous People" is a Captivating Work Exploring the Depths of Purgatory, and the Souls of Men Abandoned There. 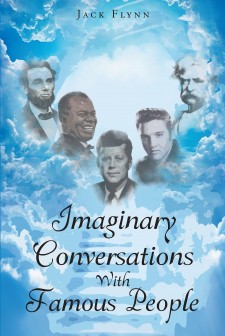 Newark, NJ, July 31, 2017 (Newswire.com) - Jack Flynn, a fabulously interesting veteran with a colorful life and dialogue, has completed his most recent book “Imaginary Conversations With Famous People”:  a look at the first 150 years after death, as many wait their eternal rest and work out their sordid details in Purgatory.

Jack Flynn got started late in writing. He worked at the B&O Railroad and the post office for thirty-eight years, retiring in 1986. He won the MD state championship in boxing, and he was a marine.  Jack says, “I was just too damn colorful to be a writer. Let somebody else write about me! But when nobody else did write about me, I decided it was time to toot my own horn! I was probably the oldest person to ever get published for the first time. I’ll be eighty-seven in April! This book was a lot of fun to write and a lot of work. I am not a trained scholar. But I am proud of my humble beginnings. I feel connected to many who might also aspire to write a book. Let the games begin, indeed!”

Published by Fulton Books, Jack Flynn’s book contains fabulously imaginary conversations as the title says. The meeting place is purgatory or Summerland. The people here (men) have survived the grave. That is a big issue. Many who died are atheists and can hardly believe they are still alive, and they linger in the corners up there until their minds are clear. Women are separated from the men. They are being treated in another part of purgatory. The average time a person spends there is about 150 years. So that is a lot of time for most of them to work out their problems. All their actions and sins committed on earth are recorded, so they can hardly dispute the evidence against them.

Readers who wish to experience this delightfully entertaining work can purchase “Imaginary Conversations With Famous People” at bookstores everywhere, or online at the Apple iTunes store, Amazon, Google Play or Barnes and Noble.

Perry Stanton's New Book 'Our Perfect Moment' is a Thrilling Novel of a Couple's Love and Strength in the Face of Overwhelming Danger and Uncertainty
Fulton Books - Dec 27, 2019

G. P. Rehder's New Book 'Death is Not the Final Chapter' is an Electrifying Novel of a Man's Deadly Job That May Have Compromised His Personal Life
Fulton Books - Dec 24, 2019