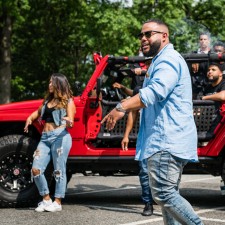 NEW YORK, September 8, 2017 (Newswire.com) - The highly anticipated 1986 EP is set to be released in early 2018 featuring hit songs such as "Free," and "Write Down." Fans can expect to be taken on a musical time machine of genuine emotions in the 1986 EP. Recorded at New York’s infamous Quad Studios with some of Hip-Hop’s most well-known engineers, the 1986 EP provides raw lyrics and unique sounding beats for pure enjoyment.

Smooth hip-hop beats laced with captivating lyrics have brought the Brooklyn native much-warranted attention in the music industry. Most recently impressing Roc Nation’s Jay-Electronica at a recent event with his lyrical talent and delivery. It’s no wonder J-Hipster’s social media following is growing at an impressive rate. Garnering widespread exposure through the unofficial remix to Marian Hill’s “Down,” hit, J-Hipster has continued to reach fans throughout the hip-hop industry.  His rise behind the scenes has gained him features on social media platforms such as 90sHipHopJunkie and WorldStarHipHop.

J-Hipster’s music and lyrics will come to life in the following innovative series called “Behind the Words.”  This series will give listeners a behind-the-scenes look at the most powerful lyrics from their favorite artists, including J-Hipster. Listeners will get an in-depth understanding of the artist’s every thought and point of view in some of their favorite songs. This series is set to launch in Spring 2018.

With singles like "Free," and "Write Down," set to be released in the upcoming days, the music industry can look forward to the resurgence of true hip hop by one of Brooklyn’s very own; J-Hipster.

For more information on upcoming appearances, interviews and musical releases follow J-Hipster on Instagram at @Jhipstermusic or visit www.Jhipstermusic.com