J. B. Millhollin's New Book "Out of Reach" Is a Thrilling Story in Which a District Attorney Must Intentionally Lose a Murder Trial to Receive Information About His Abducted Daughter.

Newest publication "Out Of Reach" from Fulton Books author J. B. Millhollin is a dark and twisted mystery of abduction, murder, and secrets that will destroy lives. 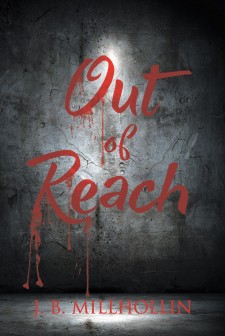 New York, NY, June 15, 2016 (Newswire.com) - J. B. Millhollin, a retired lawyer, has completed his most recent book “Out Of Reach”:  a gripping and vivid story of an assistant district attorney who loses everything after his only child is kidnapped, only to find out the only way to ever see her again it to throw a murder trial.

After spending 41 years practicing law, J. B. Millhollin has turned his attention to writing.  He says, “My passion to write…to develop that ‘new story’… has become an important part of my life, and will remain a high priority as long as I can continue to mentally create the story and its characters, then transform that creation into words.”

Published by Fulton Books, J. B. Millhollin’s book tells the tale of Jim Markman.  After his only child was kidnapped and never found, his life began a downward spiral. Six years later, the only portion of his life remaining relatively unscathed was his status as assistant district attorney for Davidson County, Tennessee. His marriage had fallen apart, his desire to interact with any aspect of society was nonexistent, and he found it hard to turn down a drink of any kind.

But while prosecuting a murderer in a case he considered impossible to lose, all that changed in a heartbeat, when near the conclusion of the state’s case, the defendant’s attorney informed him he needed to find a way to throw the trial and make sure the defendant was found not guilty. If he did, the defendant would then provide him with information about his daughter, that she was alive and he knew where she lived. Each and every twist of the plot continues to darken the story, until finally culminating in an unusual ending no one could predict.

Readers who wish to experience this electrifying work can purchase “Out Of Reach” at bookstores everywhere, or online at the Apple iTunes store, Amazon, Google Play or Barnes and Noble.

L. C. Bryant's New Book 'Beyond the Fighter' is a Profound Inspiration in Conquering Battles Against Illness and Embracing Vitality
Fulton Books - Jul 7, 2020