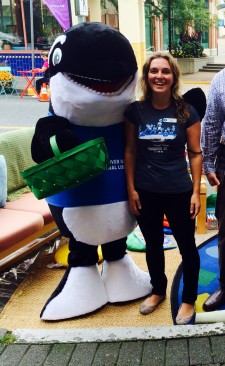 The international award heralds from the largest Library Association in North America, which recognizes innovative contributions to international librarianship. The American Library Association awarded five projects in total. Two of those projects awarded belonged to librarians at the Nanaimo Harbourfront branch of Vancouver Island Regional Library.

"This recognition is a testament to the creative and out-of-the-box staff at Vancouver Island Regional Library who are busy doing incredible work in our communities. I am truly proud."

The 2016 American Library Association (ALA) Presidential Citation for Innovative International Library Projects recognizes innovative contributions to international librarianship and is presented by the ALA President at the ALA Annual Conference in June, 2016 in Orlando Florida.

About the Two Programs

The Vancouver Island Regional Library Correctional Centre program started in April of 2015, with a partnership between VIRL and the Nanaimo Correctional Centre. The project, initiated by Jennifer Seper, began with a simple plan to improve the existing library at the centre but then grew to include a book club and a pending agreement that will allow inmates to request specific materials directly from the library.

The Nanaimo Correctional Centre (NCC) is a medium security prison that houses offenders from across the province. Under direction by Jennifer Seper, VIRL approached the centre with a partnership as a means of increasing access to materials and in effort to increase literacy levels in an otherwise marginalized area of the community. Statistics show that the vast majority of the incarcerated struggle with literacy and that those that increase their literacy rates while incarcerated have a lower recidivism rate, making literacy-focused programs essential.

Book club discussion are a good match with the therapeutic values of the inmate program as it gives inmates the opportunity to learn how to discuss their feelings and opinions and to accept differing opinions from others in a no-confrontational way. Titles read so far include The Absolutely True Diary of a Part-Time Indian, The Golden Spruce: A True Story of Myth, Madness and Greed (which all 9 members loved), and The Ocean at the End of the Lane which was universally loathed by all, but the facilitator. Feedback from the group and the prison wardens has been very positive. One inmate told Jennifer that “I asked my mom to guess what I was doing while I am away. She guessed a bunch of things and when I finally told her I was in a book club, she just could not believe it. She was so happy.”

Librarians on the Radio is an ongoing radio show and podcast hosted by Justin Unrau, Emily Orr, and Patrick Siebold, which partners Vancouver Island Regional Library with long running CHLY 101.7 radio show, Changes: The Show on Sustainability. The purpose of Librarians on the Radio is to discuss library and information issues in the wider Vancouver Island community. The show connects listeners to more than just their local branches: It showcases librarians with passions and interests and connects both library users and non-library users to the larger library world. Non-library users learn about issues librarians care about in their communities and hopefully find some connections and break some stereotypes. Library users learn about programs, events and tools some of which they never knew the library offered.

Librarians on the Radio goes beyond VIRL’s local service area to interview authors and librarians in the library world like Scott Bonner, the director of the Ferguson Public Library in Missouri; BC Civil Liberties Association expert Micheal Vonn on the 2015 Canadian federal election; and a Freedom to Read Week 2015 special with author Irvine Welsh. Making past episodes available as podcasts has increased the reach of the program beyond the community radio listener base.

The idea for the show was conceived by VIRL librarian Jason Kuffler in 2012 and was started with librarians Anthony Martin and Lara Wright in January of 2013. The show started out as a 15 minute segment but later moved to an hour once a month. In 2014, the current producer Justin Unrau joined the show and brought his radio journalism training in to modify the show’s approach. The biggest enhancement has been the creation of regular segments Beeps and Boops with co-host Emily Orr talking about information technology issues, and literary (/pulpy scifi) Bookfighting with Patrick Siebold. The team also offers Librarians Off the Radio which includes supplemental podcast content to the live radio show.

Tune into Librarians on the Radio at CHLY 101.7 FM or online at virl.bc.ca. Past episodes are available at http://virl.bc.ca/news/radio/archive.

For more information, including photographs, contact Natasha Bartlett (nbartlett@virl.bc.ca) or 250-327-3114.

Vancouver Island Regional Library (VIRL) is the fifth-largest library system in British Columbia. The mission of VIRL is to enrich lives and communities through universal access to knowledge, lifelong learning, and literacy.