Is There Any Other Way of Operation Than Hand Operation for 3D Printers? The Soon-to-Launch Wizmaker P1 Shows So. 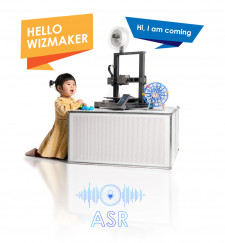 SHENZHEN, China, February 22, 2022 (Newswire.com) - Most 3D printers are like the typical device that traditionally allows people to control it manually. This includes using a knob at first, and then later, touch screen technology was introduced to allow people to manipulate their 3D printing by simply touching the screen. But there are multiple options for controlling your 3D printer. One of the most innovative ways to get your printer to operate is through ASR technology.

What is ASR technology?

According to Matthew Zajechowski of Usability Geek, ASR technology means Automatic Speech Recognition and it allows people speak to a computer interface similar to having a conversation. This type of technology has been welcomed for a while now in industries such as healthcare and customer service. It is now used in the 3D printing industry, and there are great things expected for these printers that are operated with ASR.

What will it bring to the 3D printing industry?

An ASR 3D printer allows users to quickly tell their printer what to do. Just as people can ask Siri or Alexa to do things on their smartphone, ASR 3D printer owners will be able to talk to their printer and ask it to carry out certain functions. This offers convenience that has never been available before when getting 3D prints done.

The Wizmaker P1 is the first AI voice-control 3D printer. This is one of the most innovative 3D printers, which facilitates 22 commands. It allows users to get the most crucial functions via voice commands. Some of these functions equal stop, pause, cool down and cancel. Also, you can start up the printer by saying "Hello Wizmaker".

The Wizmaker Team is formed by experts in 3D-printing related areas. We make every effort to provide consumers from all over the world with a better User Interface, more advanced algorithms, more stable printing quality, and newer energy-saving tech.