Is a Drug-Free Tshwane Possible? 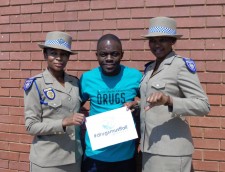 Tshwane, South Africa, May 3, 2016 (Newswire.com) - Tshwane Mayor Mr. Kgosientso Ramokgopa hosted the Tshwane Anti-Substance Abuse Movement Launch in Saulsville Township near Attridgeville. The program takes aim at the social and personal chaos caused by drug abuse, including drug-related deaths, crime and human trafficking. The suburbs of Sunnyside and the Attridgeville and Eersterust Townships are among the most urgent areas in need of intervention.

Executive Director of Drug-Free World Tshwane Robert Monareng and Coordinator for Drug-Free World Africa and Director of Special Affairs of the Church of Scientology Pretoria, Maurithus Meiring, were among the 800 concerned community leaders attending. On board were police, anti-substance stake holders, government officials and local drug action committee members. Former Bafana Bafana Soccer legend Jabu Pule, who ruined his life and career through alcohol addiction, lent his voice and experience to the campaign.

"Education is the most effective tool against drugs. The drug problem can be handled in Tshwane. We need to reach our youth before the drugs do."

Encouraged by the turnout and enthusiasm for the program, Mr. Meiring said, “It won't be one organization that handles the drug problem, but many organizations with the same goal and purpose in mind.”

Drug-Free World volunteers handed out more than 800 The Truth About Drugs booklets to those attending and signed up 60 new volunteers to promote drug-free living through distributing drug prevention materials or conducting drug education lectures.

"Education is the most effective tool against drugs," said Meiring. “The drug problem can be handled in Tshwane. We need to reach our youth before the drugs do.”