connect353 to feature panels with leaders from the Trade, Film, TV, Animation and Technology sectors 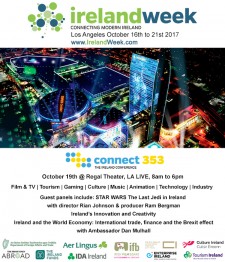 LOS ANGELES, September 29, 2017 (Newswire.com) - IrelandWeek (www.IrelandWeek.com) is excited to announce the lineup of panels and speakers for connect353 on Oct.19, 2017 at the Regal Theater @L.A. LIVE.

connect353 is a one-day conference featuring panels covering a wide base of Ireland related subjects.

Tickets for the full day of the connect353 conference are $99 for early birds by Friday, Oct. 6th, then they will be $125. The tickets include the networking breakfast and closing reception and are available at http://bit.ly/2fSmIsR

Panels and topics include a unique presentation from “Star Wars: Last Jedi in Ireland,” director Rian Johnson and producer Ram Bergman on their experience of filming in Ireland.

Guests will also hear from executives and leaders from Pinewood Studios, NBC, Belkin, Lucasfilm, Nickelodeon, Showtime, Travelzoo, Seismic Games, Voxpro as well as have the opportunity to network with a host of leading Irish trade and political officials.

Tickets for the full day of the connect353 conference are $99 for early birds by Friday, Oct. 6th, then they will be $125. The tickets include the networking breakfast and closing reception and are available at http://bit.ly/2fSmIsR

Other connect353 panels will include;  Ireland and the World Economy: with Dan Mulhall, Irish Ambassador to the United States discussing international trade, finance and the Brexit effect. Tourism in Ireland: Forging a new path, and cover topics from culture and the arts, as well as insights into the tech, gaming, animation, TV and film industries currently experiencing a boom in Ireland. Full details are here:  https://www.irelandweek.com/events

IrelandWeek is a week of conference panels and culture festivities from Oct. 16-21, 2017 in Los Angeles, California. In association with Ireland’s Department of Foreign Affairs and Trade, The Irish Film Board, Culture Ireland, Creative Ireland, IDA Ireland, Tourism Ireland, Enterprise Ireland, IrelandWeek’s focus is to bring Ireland to the world, and the world back to Ireland.  Sponsors of the week include Aer Lingus, The Ireland Funds, The California Irish Legislative Caucus and Kensington Caterers.   Supporters of the project include Music From Ireland, the American Chamber of Commerce Ireland, The City of Los Angeles and many more.  The official media partner of Ireland Week is Irish Times Abroad.

To get tickets and updates on events please go to www.IrelandWeek.com

These panels will feature notable speakers as;

ABOUT THE DEPARTMENT OF FOREIGN AFFAIRS AND TRADE
The Department of Foreign Affairs and Trade focuses on serving the Irish public, both at home and abroad, by providing a range of services to Irish citizens and work hard to ensure the promotion and protection of Ireland’s interests in the world, contributing to international priorities such as peace, security and the eradication of poverty and hunger. For more information please visit www.dfa.ie

ABOUT THE IRISH FILM BOARD
The role of Bord Scannán na hÉireann/the Irish Film Board (IFB) is the national development agency for Irish filmmaking and the Irish film, television and animation industry, investing in talent, creativity and enterprise. The agency supports writers, directors and production companies across these sectors by providing investment loans for the development, production and distribution of film, television and animation projects. For more information please visit http://www.irishfilmboard.ie

ABOUT CULTURE IRELAND
Culture Ireland promotes Irish arts worldwide by creating and supporting opportunities for Irish artists and companies to present and promote their work at strategic international festivals and venues. They develop platforms to present outstanding Irish work to international audiences, through showcases at key global arts events, including the Edinburgh Festivals and the Venice Biennales. For more information please visit http://www.cultureireland.ie

ABOUT CREATIVE IRELAND
Creative Ireland is a culture-based programme designed to promote individual, community and national well-being. The core proposition is that participation in cultural activity drives personal and collective creativity, with significant implications for individual and societal well-being and achievement. For more information please visit https://creative.ireland.ie

ABOUT IDA IRELAND
Ireland's inward investment promotion agency, the IDA, is a non-commercial, semi-state body promoting Foreign Direct Investment into Ireland through a wide range of services by partnering with potential and existing investors to help them establish or expand their operations in Ireland.  For more information please visit http://www.idaireland.com

ABOUT TOURISM IRELAND
Tourism Ireland is responsible for marketing the island of Ireland overseas as a holiday and business tourism destination by delivering world-class marketing programmes in 23 markets across the world and reach a global audience up to 600 million each year. Targeted marketing activity includes advertising online, on TV and outdoor sites, in cinemas and in newspapers and magazines, eMarketing, overseas publicity, co-operative marketing with carriers and other partners and promotions to the travel trade and consumers.  For more information please visit https://www.tourismireland.com

ABOUT ENTERPRISE IRELAND
Enterprise Ireland is the government organisation responsible for the development and growth of Irish enterprises in world markets by working in partnership with Irish enterprises to help them start, grow, innovate and win export sales in global markets. In this way, they support sustainable economic growth, regional development and secure employment. You can find detailed information on Enterprise Ireland's activities, strategy and performance in our Reports and Publications.  For more information please visit https://www.enterprise-ireland.com

ABOUT MUSIC FROM IRELAND
Music From Ireland is the Irish music export office run by First Music Contact in partnership with Culture Ireland which funds and presents the Irish showcases at large international music conferences.  For more information please visit http://www.musicfromireland.org

ABOUT THE O’NEILL GROUP
The O'Neill Group Inc. (ONG) is a full-service Conference, Event and Meeting management company specializing in producing high-quality world-class events for corporations and nonprofits both in the US and internationally with a particular emphasis on Ireland operating since 1999.  For more information please visit www.the-oneillgroup.com 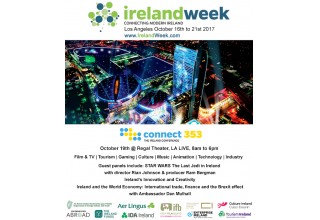 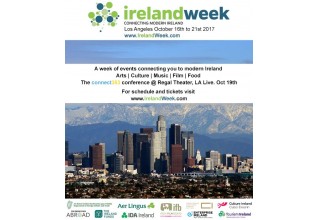 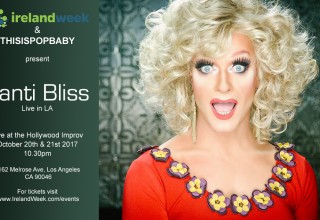 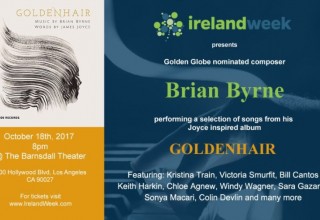 IrelandWeek to Celebrate the Immortal Words of James Joyce Set to the Music of Famed Composer Brian Byrne
Goldenhair, the live performance, to be led by Brian Bryne with renowned Irish performers
IrelandWeek - Sep 25, 2017