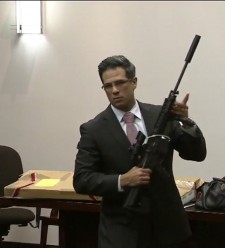 Tampa, Florida, April 13, 2017 (Newswire.com) - The Rickman Law Firm announces today that a not guilty verdict was delivered by a jury in the second degree murder trial of Ruben Rodriguez, a veteran of the U.S. Army who served two tours in Iraq. Rodriguez was charged with murder after he fatally shot an individual with his AR-15 rifle. The jury delivered their verdict after just two and a half hours of deliberation. Attorney Anthony Rickman of The Rickman Law Firm defended Rodriguez at trial. David Knox served as co-counsel.

In January 2015, Rodriguez arrived at his home to observe two men fleeing his yard. Upon seeing the men, Rodriguez armed himself with an AR-15 rifle and traveled in their direction. A few minutes later, Rodriguez came into contact with the men and asked if they had seen anyone running from his home. One of the men approached the vehicle, cursing and threatening Rodriguez. After repeated requests from Rodriguez not to approach the vehicle and advising the individual that he had a weapon, the man arrived at Rodriguez’s window and continued to threaten him.

On April 7, 2017, a jury found Rodriguez not guilty of murder. If convicted, Rodriguez faced a mandatory sentence of life in prison. During the trial, Rickman argued and established through testimony that the shooting was a justifiable homicide under Florida’s Self Defense and Stand Your Ground law. The defense established that Rodriguez reasonably believed that the force was necessary to prevent serious bodily injury, death, or the commission of a forcible felony.  Rickman successfully argued that even though Rodriguez followed the men and was not on his property when using his firearm, under Florida’s Stand Your Ground Law, he was justified in using deadly force because Rodriguez was in a place where he had the right to be (a public street) and was not engaged in criminal activity at the time of the shooting. Ultimately, the jury agreed by rendering a not guilty verdict.

“As a member of the United States Army, Ruben Rodriguez defended our country and, on January 3, 2015, he defended himself. I have had the honor of successfully defending Ruben Rodriguez at his trial for second degree murder. The jury’s verdict of not guilty sends a message that people who lawfully own and possess firearms have the right to use those firearms to defend themselves when faced with a threat,” said Rickman.

ABOUT THE RICKMAN LAW FIRM

The Rickman Law Firm is dedicated to providing clients throughout the state of Florida with top notch legal representation. Founded by Attorney Anthony Rickman, a former state prosecutor, the Rickman Law Firm provides aggressive legal representation to citizens accused, investigated, or arrested for a crime in Florida state and federal court. With over ten years of experience defending the citizens of the State of Florida, Mr. Rickman has developed a reputation of being a fierce litigator and representative of his clients in the courtroom.

About The Rickman Law Firm

The Rickman Law Firm is dedicated to providing clients throughout the state of Florida with top notch legal representation.