Miami Motorsports Fan Launches The ABCs of Racing, ahead of the MIAMI GRAND PRIX 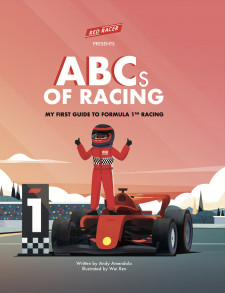 The first book in the series, Red Racer Presents: The ABCs of Racing, teaches concepts about racing with Red Racer as the guide. Not your ordinary ABC book, this 34 page, vividly illustrated book follows the alphabet with detailed explanations of racing terms and engineering concepts. The books feature cars inspired by the 2022 racing season, as well as actual tracks and racing situations around the world to engage both kids and parents.

"The part of racing that Iʼm most fascinated by is the science behind it all - the huge teams of engineers working on physics, aerodynamics and cool tech. I knew Red Racer Books could be a great way to introduce STEM concepts to kids and get them excited about something new," said Andy Amendola. "Since racing is growing in popularity in the US, the Grand Prix is coming to Miami in May, and the next season of Netflix's Drive to Survive launches in March, we knew this was the perfect time."

Formula 1 racing has surged in popularity in the US. According to ESPN, Viewership in the US is setting record numbers. Nielsen Ratings show how Formula 1 racing will reach 1 Billion fans globally in 2022.

A former advertising executive, Andy Amendola has always loved driving, but when he was introduced to Formula 1 racing via the hit Netflix series Drive To Survive, it was love at first sight. He became fascinated with the sport, and decided to write a children's book after discovering there were very few books for kids about car racing available. Andy grew up in Florida but his parents are immigrants from Uruguay, South America.

The book is currently available for pre-order through Kickstarter along with fun rewards such as a coloring book, personalized digital prints, hats, stickers and more. The second book in the series, a deeper dive into the race cars and all the technology and science involved, is currently in the illustration process. The Kickstarter campaign can be accessed at www.redracerkickstarter.com.

Red Racer Books is a new children's book series all about car racing. With Red Racer and Roxy the Engineer as your guides, these books are on a mission to give kids in the US and beyond a global perspective on sportsmanship, diversity, science and technology. More information can be found at redracerbooks.com.