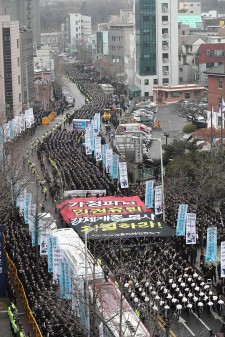 SEOUL, South Korea, March 6, 2018 (Newswire.com) - Despite the introduction of a new workweek bill aimed at improving quality of life, religious activists are calling for the South Korean government to first protect its citizens' fundamental human rights.

On March 4th, over 100,000 demonstrators rallied in front of the Christian Broadcasting System (CBS) and Christian Council of Korea (CCK) offices in South Korea to condemn the silence of both the government and Christian community in the country. The rally was echoed in the cities of Los Angeles, New York, Chicago, San Francisco, Washington D.C., and countries including Guatemala, El Salvador, Argentina, Mexico, Philippines, Zimbabwe, Australia, France, Germany, and Indonesia, hosting respective protests.

Demonstrators are calling on the government to enact stricter laws to ban the programs. “The problem is that conversion program leaders call the practice ‘counseling,’ masking their true intent for financial profit and allowing them to systematically violate human rights beneath the detection of the law,” said Ms. Ji Hye Choi, HAC Co-President.

Program leaders will use fear to compel family members to “protect” their families from minority religions. Family members are coached to enroll their children, husbands, and wives in the program using any means necessary, even force. Cases have involved drugging victims with sleeping pills, taping up victims’ mouths, and binding handcuffs on the victims’ hands and feet to transport them to program locations. Once in a remote location, program leaders will attack the victims’ beliefs until they “convert” him or her back to the Christian faith.

In January, Ji-In Gu, a 25-year-old South Korean woman, died of suffocation while undergoing the conversion program. Her parents, who collaborated with program leaders, are under investigation for her death.

This was not Gu’s first time in the program. In 2016, she was enrolled and subsequently kidnapped by her family to be “counseled” for 44 days. Before her death this year, Gu pleaded to the presidential office of South Korea on its petition website, calling for legal protection from religious discrimination. No official response from the government has been issued.

Furthermore, the online petition for the ban on coercive conversion program received 140,000 supporters, but it disappeared in the government website without an explanation.

“Coercive Conversion Programs and the organizations responsible must be shut down and held accountably,” said Steven Acosta, an American human rights activist, “these protests are blowing the winds of justice.”