Kickoff on the Santa Monica Pier 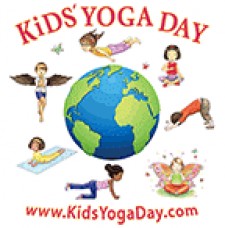 LOS ANGELES, CA, April 5, 2017 (Newswire.com) - Celebrating both oneness and diversity, 40,000 kids from 45 countries and all 50 states are set to perform yoga on April 7 at 11 a.m. in their local time zones for International Kids’ Yoga Day (KYD). Starting in the South Pacific region, kids will do five minutes of yoga with their teachers and then symbolically pass the baton westward to kids in the next time zone as the world’s children surf a yoga wave around the globe to a Hawaii finish at 11:05, Aleutian Standard Time.

L.A.  kids will do yoga on the Santa Monica pier the day before, April 6 from 4-6 p.m., together with their partners “down under” who are a day ahead and will livestream to the pier as they start the yoga wave at 11 a.m., April 7 Australian Eastern Standard Time. https://www.facebook.com/kidsyogaday/

The rally is free and features a kids concert, yoga classes, giveaways and a proclamation from the L.A. County Board of Supervisors to KYD founder and award-winning author Teresa Power spotlighting Los Angeles as the founding city of a global movement to bring yoga and mindfulness to the world’s children.

On April 7 in Los Angeles, Power, author of the bestselling book, The ABCs of Yoga for Kids , is teaching two yoga classes to over 300 kids from K through 8th grade at St. Raphael’s School,  924 W. 70th Street, Los Angeles, from 11 to 11:30 a.m. She spends much of her time bringing yoga to underserved communities that may not have access to yoga classes. “One of the reasons I wrote my first book was to make yoga accessible to everyone, regardless of location or finances.” She will also introduce her latest title, The ABCs of Yoga for Kids Around the World. https://www.dropbox.com/s/8s928yuvibjzmb0/ABCs%20of%20Yoga%20for%20Kids%20Around%20the%20World.pdf?dl=0

“We want to bring worldwide attention to the fact that yoga is every bit as good for children as it is for adults,” says Power. “In fact, there is growing evidence that yoga may be even more beneficial for kids because it can calm them after recess, combat obesity, counteract the effects of too much technology and perhaps even replace drugs as a method to deal with ADHD.” Her personal mantra is “Changing the world, one pose at a time.” https://youtu.be/13PQi2gJ97A

Stafford House Books, Inc. is committed topublishing quality books to enhance children's health and fitness through the practice of yoga.