Charlotte Raine, an unquestioned master of romantic suspense thrillers, is launching a new series with high anticipation! Book one, "Particles of Murder" in her new series "Shadow of Death" will be released during a one-of-a-kind social media event on April 25th, 2016. This event has been called "revolutionary" by some and "spectacularly unique" by others. 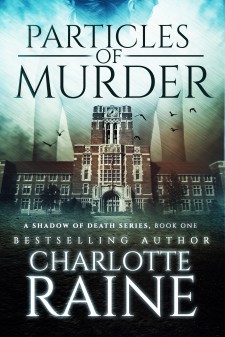 Denver, Colorado, April 25, 2016 (Newswire.com) - When it comes to suspenseful fiction, there's no doubt author Charlotte Raine is a master whose work has crossed several genres.  The best selling author's latest book “Particles of Murder” is set to be released on April 25th, and begins a new series named “Shadow of Death”, which most readers would place in the suspenseful-thriller genre.  Always one to stay connected with her valued readers, Raine has announced a unique and exciting Facebook event that will be giving away the entire novel,  starting on April 25th.  The book will debut at an Amazon discount price of only $0.99.

“I'm really excited about 'Particles of Murder' and its main character Mira Solano,”  commented the author about her latest work.  “This story is a great mix of suspense and romance, and I think my readers old and new will find the 'Shadow of Death' series very compelling.  I know writing it has been an exciting journey.”

Raine has been the creative force behind a number of other very successful series including the Grace Ellery romantic suspense series as well as her Grant and Daniels series which has been picked up by an international publishing house and will be translated into other languages.  She is consistently a best selling author on Amazon.

According to Raine, the Facebook event for “Particles of Murder” will give away the entire book for free.  She will post one part every morning and afternoon, Monday thru Friday this week.  Follow her page all week and read the entire novel along with the rest of the world.

For more information about Charlotte visit her website:  http://www.charlotteraine.com