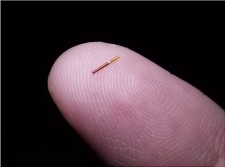 3D microsystems, often called microelectromechanical systems (MEMS), are tiny mechanical devices, with features smaller than a human hair, that can interact with the world around them. The most common devices are used as sensors, such as for monitoring acceleration, rotation, sound and vibration. Other applications are for tiny actuators (such as micromirror arrays and microswitches) and 3D structures (such as medical micro-implants). However, many products have yet to be successfully miniaturized, particularly products that require high integration of materials, such as medical and industrial products.​

“MEMS are traditionally created via an additive manufacturing technique from the semiconductor industry called thin-film processing, which inherently limits the types of devices you can build,” said Paul Dhillon, CEO of Integra Devices. “For the first time in 30 years, we are introducing a new paradigm that surpasses these limits and enables the development of a whole host of micro-devices that were before not possible to build.”

“As one of the world’s leading electronic substrate and packaging providers, we continue to look at new technologies that can help move our market forward and alleviate the pains of our customers,” said Gregory Kim, CEO of Daeduck. “We are very excited about the new opportunities Integra’s unique manufacturing paradigm provides by leveraging our capabilities and infrastructure.”

“OM Sangyo continues to support and lead the research and development of cutting-edge plating technologies and their applications,” said Keitaro Namba, President of OM Sangyo. “We have followed and supported the work done by Mark Bachman at the University for several years and have witnessed first-hand the outstanding growth and maturation of the technology. Integra’s ability to integrate our processes into micro-device products opens up many doors and expands our business into different markets.”

Xidas leverages a groundbreaking new paradigm to build
micro-devices, created from over 15 years of research and over $20M in funding at UC Irvine.