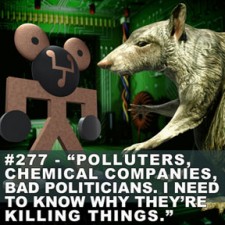 “For quite some time,” says Metrov, “I’d been looking for ways to integrate messages of sustainability into my work. I wanted to do my part as an artist. When Leonardo DiCaprio purchased an artwork on Instagram, the entire art world, it seemed, boarded the burgeoning social media platform. Artist Amalia Ulman’s make-believe Instagram story about a troubled Beverly Hills socialite landed her a show at London’s Tate Museum. I knew Instagram would be The Creature NU’s stage.”

NU, a small, loveable, noble savage, embarks on a mission to Earth to “find out what’s gone wrong.” In the beginning, he discovers spectacular, natural grandeur. But as he travels across America, he falls ill from toxic drinking water. He witnesses the horrors of strip mining, morbid obesity, and land forever destroyed by oil production. He meets other creatures who tell him he must go to Wall  Street to find the perpetrators. When he arrives, however, he’s taken in by a gang of uber rich, subterranean rats who secretly control the stock market. It’s not until he falls for the allure of materialism, acquires his own wealth, then becomes homeless and nearly dies from cancer, that the Creature NU finally awakens to his destiny—to become a sustainability role model for the youth of the world.

Metrov began his career as portraitist for superstars like Margaux Hemingway and Mick Jagger. His work is exhibited and collected internationally, though his priority is to explore “the ever-evolving potential of artistic mediums and technologies.” Learn about All Things NU at: www.DoYouNU.com.

Known for his compelling juxtapositions of opposites reflecting an underlying thematic preoccupation with ecocentrism and its inherent correlation to advanced human potential, Metrov's paintings, sculpture, and films reside in collections worldwide.