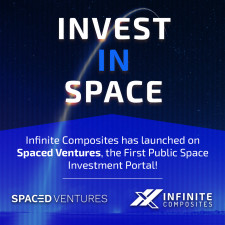 TULSA, Okla., January 6, 2022 (Newswire.com) - Infinite Composites opened its newest funding round to the public, as a first opportunity to provide friends, family, followers, fans, customers, and vendors a chance to support and invest in changing the way gasses are stored in aerospace, transportation, and industrial applications.

This crowdfunding equity round provides a direct access investment into Infinite Composite's growing energy company, who is focused on storing high-pressure and cryogenic gasses. Infinite Composites provides products and services for a range of companies, with a primary focus on aerospace. They're raising an equity crowdfunding campaign on Spaced Ventures, a new public investment platform for the space industry.

"We skipped the traditional early friends and family round early on, seeing the investment of the research at the time as a risky opportunity to provide initial friends and family," Michael Tate, Co-Founder, and COO. "We bootstrapped raised our first couple hundred thousand dollars through business plan competitions like the OSU Riata competition, and the LTFF StartUp Cup, grants like OCAST, NSF, NASA, and some initial early adoption customers.

Prior to the Spaced Ventures campaign, Infinite Composites had raised more than $4M from angel investors to support setting up its first facility and expanding its team. Now, Infinite Composites is on track to have its first profitable year and is raising capital to accelerate growth. "We are currently experiencing team and equipment bottlenecks due to the overwhelming demand for Infinite Composites products," said Mr. Tate. "We are even having to turn down attractive programs due to overlapping timelines and an abundance of new programs which are driven by capacity constraints in personnel, equipment, and even facility size."

In the first few hours of going live on Spaced Ventures, Infinite Composites had raised $100K and over $200K in the first two weeks.

Infinite Composites, an 11-year-old "start-up" has been developing its technology since 2010. Infinite Composites technology is linerless, high-pressure gas storage tanks, which have been further developed to store cryogenic fluids. These tanks are being used in a variety of industries, where performance is critical. Launching payloads space, orbiting and operating in space, racing across the desert in a Baja hydrogen race vehicle, or powering an aircraft, these tanks are being used in the most demanding new applications.

If these kinds of programs and projects excite you, you might be primed to be an investor in Infinite Composites.