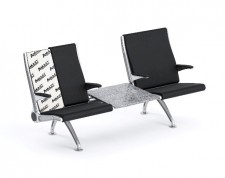 Scottsdale, AZ, March 14, 2017 (Newswire.com) - One of the world’s leading manufacturers of airport seating is unveiling a line of bullet- and blast-resistant furniture designed to shield travelers in the event of an act of violence in the public space.

Arconas, the leading designer and manufacturer of furniture for airports and public spaces, has teamed up with Amulet® Ballistic Barriers to seamlessly integrate Amulet’s bullet-absorbing technology into airport seating.

The furniture line is a first for the global airport industry, and will be unveiled March 14-16 at the international Passenger Terminal Expo 2017 in Amsterdam.

The “invisible” barrier technology is integrated during the manufacturing process, and is designed to protect human lives from gunfire or explosive devices without affecting the design, appearance or comfort of the airport seating.

“Unfortunately, acts of violence in the public space have become an all too common occurrence around the globe,” said Jeffrey Isquith, President and CEO of Arizona-based Amulet® Ballistic Barriers. “Our No. 1 goal is to save lives – and this technology adds a critical layer of protection for the public. Amulet® is a 21st Century solution to saving lives and reducing injuries to innocent people.”

“I am also very proud of the exceptional level of collaboration demonstrated between the U.S.-based Amulet technology team and our Canadian alliance partner Arconas.  The desire to protect life in the public space is truly universal,” Isquith said.

“As the leading designer and manufacturer of furniture for airports and public spaces, Arconas is constantly striving to develop design innovations that are human-focused and meet changing market demands,” said Dan Nussbaum, Arconas President. “There is demand for this technology, not only in airports, but also in public spaces throughout the world.”

Amulet® barrier technology has fast become a key component of the physical security market, which is expected to double in size within the next few years.  Amulet® Ballistic Barriers are designed to be uniquely compatible with interior furnishings and exceed U.S. National Institute of Justice as well as Underwriters Laboratories performance criteria for handgun, rifle and explosive-device threats.