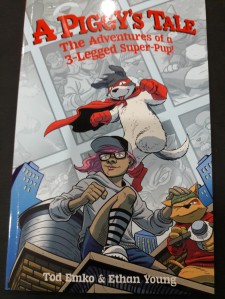 From writer Tod Emko (WHALE WARS) and Eisner Award nominated artist Ethan Young (NANJING: THE BURNING CITY, THE BATTLES OF BRIDGET LEE) comes an all-ages adventure that is sure to delight kids and adults alike!

Adventure has a new face, and it’s adorable! After an accident takes his leg, a rescue dog named Piggy discovers he has super powers, and must fulfill his fate to save other critters from despair.  Accompanied by a street-smart cat and a young woman who can talk to animals, this unlikely trio of heroes must stop evil from befalling victims in New York City.

Praise for A Piggy’s Tale:

“But what really surprised me about A Piggy’s Tale is that my boyfriend leaned over for a better look as he passed my screen, asked if he could read it right then, and sat and devoured the whole preview and said he’d love to read more”

“Piggy is both adorable and inspiring, on the page and in real life.”

“Conservation in developing countries often ignores the plight of domesticated animals,” commented Darwin Animal Doctors co-founder Andrea Gordon.  “With Darwin Animal Doctors, we began our efforts in the Galapagos Islands to spay, neuter, and treat the domestic animals so that they do not overpopulate the islands, spread diseases to the native wildlife, or eat the native wildlife.”

Since starting Darwin Animal Doctors in 2010, the veterinarian clinic in the Galapagos Islands has treated more than 10,000 animals and helped rehome animals off of the islands.  The funds raised by A Piggy’s Tale will enable more animals to be saved and protect the UN World Heritage Site.

Author Tod Emko commented, “Piggy is the dog who inspired this work and creating a graphic novel ensures that his message can be spread worldwide in a fun and creative way.”