India's Black Untouchable Transforms Into Dragon to Meet 'The Spirit of Dr. King' 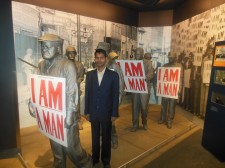 MEMPHIS, Tenn., October 24, 2017 (Newswire.com) - When Dr. Martin Luther King Jr. was assassinated in Memphis, Tennessee April 4, 1968, 41-year-old Black medical doctor Rajeev Kumar was not born; however, the task of an “Oppressed Dalit” or Black Untouchable from India to make it to the Dr. Martin Luther King Civil Rights Museum in Memphis, Tennessee is as rare as the mystical Carp becoming a “Dragon.” Now, as Dr. Kumar prepares to go back to his home country of India today following his transformative journey to and through the U.S., a “Dragon” has emerged from the doctor's experience and joining with the “Proud Black Buddhist World Association.” Proud Black Buddhist World Association founder Memphis World Karate/Kickboxing Champion Anthony “Amp” Elmore celebrates Dr. Kumar's recent journey and transformation through the telling of Kumar's life-long journey.

There is a story written in a Buddhist document called “The Gosho” by the 13th Century Black Japanese Buddhist sage Nichiren Shonin the difficulty of a “Carp to become a Dragon.”

Injustice anywhere is a threat to justice everywhere. We are caught in an inescapable network of mutuality, tied in a single garment of destiny. Whatever affects one directly, affects all indirectly.

The story reads: “A WATERFALL called the Dragon Gate exists in China. Its waters plunge a hundred feet, swifter than an arrow shot by a strong warrior. It is said that a great many carp gather in the basin below, hoping to climb the falls, and that any that succeeds will turn into a dragon. Not a single carp, however, out of a hundred, a thousand, or even ten thousand, can climb the falls, not even after ten or twenty years. Some are swept away by the strong currents, some fall prey to eagles, hawks, kites, and owls, and others are netted, scooped up, or even shot with arrows by fishermen who line both banks of the falls ten chō long. Such is the difficulty a carp faces in becoming a dragon.”

The Black untouchables — now called the Black Dalits of India — suffered the worst “inhumanity against humanity in Human History.” Their suffering and racism were so bad that they make a “Southern Slave Owner seem like a choir boy.”

Unknown to Americans and most of the world, “The Birth Place of World Racism is in India.” While America had “Chattel Slavery,” the racism in India called the caste system in India was far harsher than “Slavery in America.”

The racism in India was the instituted into the fabric of the India culture via religious dogma known originally as “Brahmanism” that later evolved into the religion known in India as Hinduism. Hinduism created a religious codex on India's Black inhabitants that was so cruel and warped that their model in time produced the world's first sanctioned racism and sexism that was so perverse it infected the world with racism and sexism.

The Caste System in India created an “Invisible Black Nation” that is the “World’s largest Black Nation” outside of Africa. This Black Nation is hidden and unknown to the outside world. When India gained its Independence from Britain in 1947, India’s staunch advocate of independence from Britain, Mahatma Gandhi — a “Hindu Brahman” — supported the racist caste system of the world’s harshest inequality. Gandhi deceived the Black Dalits in India and the world. In the English language Gandhi speaks of equal rights and freeing the Dalits, however in the Indian Language he promotes the racist Hindu cast of Brahman oppression against the Dalit.

The story of Dr. Rajeev Kumar is a story that explores the “root of racism” and the untold Black history story and how “only a Black dragon” could emerge to meet the spirit of Dr. Martin Luther King Jr. in Memphis.

It was Blacks known as Cushites who left Africa and migrated throughout the world. In the case of Dr. Rajeev Kumar while born and characterized by a racist social system as a Dalit Cast, Dr. Kumar understands the Dalit historical past of his people known as the “Naga.”

The word “Naga” means Snake or Dragon and they were the “original Black rulers of India” who are today the subjugated “Dalit Underclass.” The people called “ Naga” in India were called “Nubian in Africa” at the time of the Black Greek writer Homer; India was known as “Eastern Ethiopia.”

A Harvard study in the American Journal of Genetic study reveals that the caste system began in the 1900s. This is in concert with the emergence of the “Hindu Religion” that taught cast and forbade mixing of various groups.

The “Hindu Religion” subjugated the Dark Skin original rulers of India the Dravidians to a “Subhuman Class” known as Dalit or untouchables.  The untouchables or Dalits in India are ancestors to the Naga who once ruled India. The Nagas in India are known in Africa as the Nubians.

The Black Indians who were once known as Nagas were regulated as the Black Untouchables and the history of the Nagas went into oblivion and the Dalits emerged where they are today as the second largest Black nation outside of Africa. The Dalits are the invisible Black nation.

A Dalit born in 1891 by the name of Bhimrao Ambedkar is the “Dalit Icon” who liberated the Dalit people and he is the man responsible for releasing a “Baby Dragon” like Dr. Rajeev. While Dr. Ambedkar faced discrimination he was among the first Dalit to graduate both high school and college. In 1913 with the help of a King he traveled to America to attend Columbia college in America where he would earn doctorate degrees in Economics.

Dr. Ambedkar became India’s law minister who wrote “India Constitution.” While writing the constitution Dr. Ambedkar challenged Indian Scholars to produce scientific evidence of the Hindu Vedic writing like the “Aryan Invasion Theory,” The White Buddha, or the start of the Caste system. While a hero to the outside world, Mahatma Gandhi was the greatest oppressor to Dalit people went on a fast oppose measures to give Dalits equality.

In October of 1956, Dr. Ambedkar along with 500,000 Dalits rejected Hinduism and re-introduced Buddhism back to India. Just months later, Dr. Ambedkar passed.

In drafting India’s Constitution, Dr. Ambedkar arranged in writing that there would be guaranteed seats in India’s medical schools. Over the years thanks to Dr. Ambedkar, Generations of Dalits have come to America. Most hide their Dalit history many are “Hindu” and reject their Black Naga Ancestry.

Dr. Rajeev Kumar is not only a “Dalit”; he recognizes that he is of the family of the “Naga” or the “Proud Black Buddhist.” Dr. Ambedkar encouraged Dalits to become once again “Naga Buddhist.” The highest teachings of the Buddha is the Lotus Sutra that explains about the “Bodhisattvas of the earth” who are born in our world to make change.

Dr. Kumar’s mission in Memphis is not only to unite the revolutionary struggles of Dr. Martin Luther King and Dr. Bhimrao Ambedkar but to move in the “Spirit of the Dragon” to bring attention to the fact of the Dalit in India and the African-American; while all humans come from Africa, the Dalits and African-Americans are today known as “Black.”

Dr. Kumar joined with “Proud Black Buddhist World Association” founder Memphis World Karate/Kickboxing Champion Anthony “Amp” Elmore. Elmore plans to travel to India to meet with Dr. Kumar and Dalit people to formally honor the legacy of Dr. King’s 50th via bringing our families together via making the over 200 million Dalits visible and the Black struggles visible to the world. 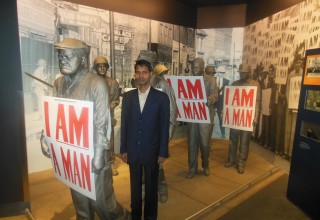 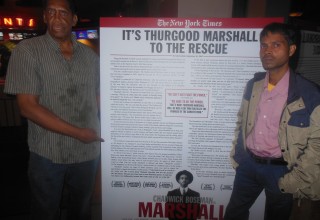 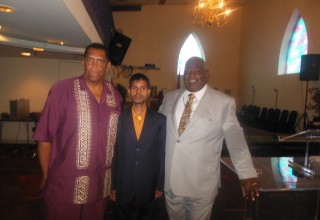 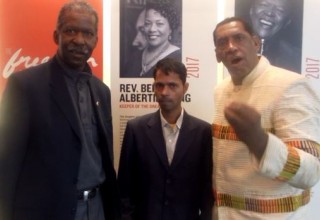 The Mis-Education of the Buddhist Negro
Dr. Carter G. Woodson the father of African/American history published his classic 1933 book "The Mis-Education of the Negro." Woodson notes that American education directs Blacks to move into an inferior position in our society. Anthony Amp Elmore President and Founder of the Proud Black Buddhist world Association teach that Japanese Buddhist teachers purposefully Mis-Educate Black people in regards to not only Black Buddhist history, but to the African presence of Japanese culture & history.
Proud Black Buddhist World Association - Jan 4, 2016