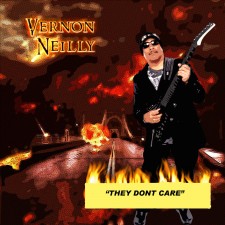 Los Angeles, USA, July 19, 2016 (Newswire.com) - Boosweet Records, the award winning independent label based in Southern California, a few weeks ago released the new video “They Don’t Care” by Vernon Neilly. The video has since gone viral with millions of views via social media sites, regular rotation on popular television video programs on major networks, as well as independent. The popularity of “They Don’t Care” has helped catapult the new single “They Don’t Care” into the Billboard “Hot Singles” Charts entering at #12.

Vernon Neilly an award winning guitarist/actor himself, carefully crafted the highly controversial music video for the current times showcasing the injustices of the political system, the effects of world terror, the highly polarizing political figures who contribute to the divisive rhetoric being loosely used without regard to the eventual consequences. Vernon fell back on the acting skills that he used in “Blockbuster” movies such as, “Along Came Polly” with Jennifer Aniston, Ben Stiller, and the late Phillip Seymour Hoffman, “Starsky And Hutch” with Vince Vaughn, Owen Wilson, and Ben Stiller, and “Walk Hard” Columbia Pictures, to make the video as compelling, and controversial as possible to grab the viewers attention.

“They Don’t Care” is the first single from the album “Outta Time” which features an all-star lineup of some of the best and legendary musicians in the world such as Greg Howe (Michael Jackson, Justin Timberlake, Rihanna), Victor Johnson (Sammy Hagar, Busboys), Doug Wimbish (Living Colour, Jeff Beck), Kiko Loureiro (Megadeth, Angra), and many others. The appeal of “They Don’t Care” is the reality of chaos that is happening in the world now and it is touching a nerve of consciousness.

Boosweet Records in an independent award winning record label based in the metropolitan area of Los Angeles California. It works with major artists as well as independent artist. The music from Boosweet artists continues to play all over the world.