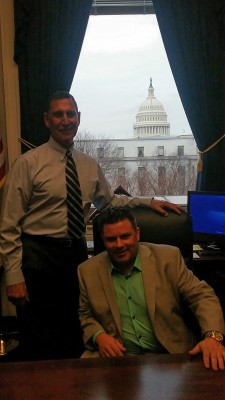 Wildwood, NJ, January 30, 2017 (Newswire.com) - ​The coordinator for the Trump campaign in Cape May County, who cut Congressman Frank LoBiondo’s name off campaign signs, had to reach out to the congressman for tickets to the Trump inauguration, reports Christopher South, Staff Writer.

Brian McDowell, removed LoBiondo’s name from local campaign signs, which included the name of Republican freeholder candidates Gerald Thornton and Marie Hayes. The move was in reaction to LoBiondo saying he would not endorse Donald Trump for president, citing his insults to women, minorities, and Gold Star families. McDowell believed LoBiondo should support the Republican candidate for president.

After the Nov. 8 general election, McDowell called his contacts at the Trump Tower to see about getting tickets to the inauguration.

“They said, I had to go through my legislator to get tickets,” McDowell said. “I thought, how the hell can I call LoBiondo after calling him out during the campaign?”

McDowell decided to email LoBiondo, saying he was glad LoBiondo was reelected, that he hoped the congressman would understand he had to be loyal to his candidate, and he hoped LoBiondo would support Trump as president.

“LoBiondo got back to me within one day and said no problem, I’ll get you tickets,” McDowell said.

McDowell received his tickets along with a letter inviting him to a meet and greet with LoBiondo at his office after the inauguration. He asked for a photo and LoBiondo insisted McDowell sit in his seat, but added, “Don’t get too comfortable. I intend to be there for a while.”

McDowell said he sees the irony in having to ask LoBiondo for tickets to the inauguration.

“I had never met him before,” McDowell said, “and I came to understand that it requires give and take in order to get things done – there’s a lot of moving parts in government.”

McDowell said he liked the congressman’s chair and the view from his office. Asked if it inspired him to run for office, he said a local Republican leader told him he might have a political future after taking the risk to back Trump when others did not. Someone else told him he has “a very electable name” because he supported Trump from the beginning.

McDowell said although Cape May County is a Republican stronghold, the Trump campaign brought out 10,000 more votes than Mitt Romney or John McCain.

Provided with tickets, McDowell said he went to Washington, D.C., on Thursday, adding that he did not come across any protests or problems. He attended a function at the Capitol Hill Club with LoBiondo, and on Thursday evening he went to the ball for the New Jersey delegation, which was headed by Gov. Chris Christie.

For the inauguration on Friday, Jan. 20, McDowell said he was 40 or 50 feet away from the president. Afterwards, he visited the House of Representatives, and then watched the inauguration parade.

McDowell said the security at the inauguration was incredible. He said seeing that much security for an event impressed the significance of the day, and made him feel very proud to be an American.

“I never dreamed of going to an inauguration before, but I think everyone should experience it,” he said.

McDowell said he got to his assigned area just as Trump began to speak. He said he had green tickets, which he said were seating tickets.

“His speech, if he does 10 percent of what he said he would do, it will be good for America,” McDowell said.

McDowell said he first heard Trump speak in June 2015 and Trump’s message resonated with him, and he believed if it did the same to others Trump would have a good shot at winning the presidency.

McDowell said on Friday, all the vendors were selling Trump merchandise – caps with “Make America Great Again,” T-shirts, flags. He said on Saturday, the day of the Women’s March on Washington, all the Trump merchandise had been replaced by Hilary Clinton items.

About The Wildwood Leader