West Palm Beach, Florida , November 26, 2018 (Newswire.com) -  The United States Polo Association (USPA), USPA Global Licensing (USPAGL) and International Polo Club (IPC) are elated to announce a thrilling new high-stakes tournament series for the sport – the GAUNTLET OF POLO™. This heart-pounding competition is a true survival of the fittest, where the world’s

preeminent teams, most skilled athletes, and finest horses will come together for three months at the U.S. Polo Assn. field at IPC in Wellington, Florida where they will battle head-to-head for the coveted C.V. Whitney Cup, the USPA Gold Cup®, and the U.S. Open Polo Championship®. In this competition, there is more on the line than trophies and titles. The GAUNTLET is the ultimate test and the team that wins all three tournaments will be crowned GAUNTLET Champion and take home a total prize of $1 million – the largest purse in the history of the sport.

The GAUNTLET OF POLO™ is anticipated to bring in tens of thousands of fans from around the world and should break attendance records, creating an immediate positive effect for the Palm Beach community and surrounding areas. The 2019 tournament series begins with the C.V. Whitney Cup held February 13-24, 2019 and continues with the USPA Gold Cup, February 24- March 24, 2019 culminating with the U.S. Open Polo Championship® March 27-April 21, 2019. The games will be livestreamed on the USPA Polo Network each week, with the final match aired to millions of viewers on CBS Sports on April 28 at 2pm EDT. The final match will also be replayed globally in Latin America, Europe, Asia and India.

“The GAUNTLET will challenge the world’s top players and horses to strive for the most prestigious trophies in the United States and provide a new platform for athletes, teams, sponsors and polo fans,” said Robert Puetz, CEO of the USPA. “Vying for $1 million dollars in prize money over the course of three months, the strongest teams and most talented players in the game will arise, elevating both their preparation and horses for the chance to etch their names in American polo history as the GAUNTLET Champion.”

The GAUNTLET brings the passion and drive of this esteemed sport to the foreground, testing the players’ mental and physical acumen as they compete in the most challenging and most valuable polo tournament in the continental U.S.A.

“In order to expand interest in the sport, it is essential that emerging players, as well as new teams, have the opportunity to participate in elite tournaments,” said Mark Bellissimo, managing partner of the Wellington Equestrian Partners (WEP) and owner of the IPC. “Supported by the immense and historic addition of prize money this season and our unprecedented partnership with the USPA and USPAGL, we will ensure a change in the trajectory of polo in this country.”

For the first time in the sport, the tournament series will include a "Winner Take All" prize money format guaranteeing $125,000 to each of the winning teams of the C.V. Whitney Cup and the USPA Gold Cup, and a $250,000 prize for the winner of the U.S. Open Polo Championship®. A $500,000 bonus for any team that wins all three tournaments in consecutive order will serve as an additional incentive, yielding $1 million in total prize money and recognition as the GAUNTLET Champion.

“The idea of the GAUNTLET OF POLO™ is to create something new and different that will draw attention to the tournament series and emphasize the difficulty of a team winning the sport’s ultimate test – three tournaments, but only one champion,” said David Cummings, chairman of USPAGL. “As the first event held in partnership between the USPA, IPC and USPAGL, the GAUNTLET OF POLO™ will elevate not only the spectator experience but will display the raw power and refined athleticism of the players and their horses.” And we are proud to have the field name home of U.S. Polo Assn., the official licensed brand for the USPA.”

For polo, the GAUNTLET OF POLO™ represents the challenge created by linking the C.V. Whitney Cup, the USPA Gold Cup and the U.S. Open Polo Championship®. The GAUNTLET will be the sport’s ultimate test and greatest prize.

Tickets for all GAUNTLET OF POLO events will be available for purchase on November 26, 2018 at www.internationalpoloclub.com.

The U.S. Polo Association was organized and exists for the purposes of promoting the game of polo, coordinating the activities of its Member Clubs and Registered Players, arranging and supervising polo tournaments, competitions and games, and providing rules, handicaps, and conditions for those tournaments, competitions, and games including the safety and welfare of participants and mounts. Founded in 1890, the United States Polo Association (USPA) is the national governing body for the sport of polo. USPA is currently comprised of almost 300 member clubs with thousands of individual members, and oversees 40 national tournaments. For more information, please visit uspolo.org.

U.S. Polo Assn. is the official brand of the United States Polo Association (USPA), the nonprofit governing body for the sport of polo in the United States founded in 1890, making it one of the oldest sports governing bodies. With a global footprint of $1.6B and worldwide distribution through 1,050 U.S. Polo Assn. stores, department stores, independent retailers and e- commerce, U.S. Polo Assn. offers apparel for men, women and children, as well as accessories, footwear, travel and home goods in 166 countries worldwide. USPA is one of the major sponsors of the GAUNTLET OF POLO.

USPA Global Licensing Inc. (USPAGL) is the for-profit subsidiary of the USPA and the exclusive worldwide licensor for the USPA’s global licensing program. USPAGL is the steward of the USPA’s intellectual properties, providing the sport with a long-term source of revenue.

Additionally, USPAGL also produces global broadcasts to bring the sport of polo to millions of consumers and sports fans around the world.

The International Polo Club Palm Beach (IPC) is the premier polo destination in the world, hosting the largest field of high-goal teams and the most prestigious polo tournaments in the United States. Polo enthusiasts descend upon Wellington, FL each winter season to enjoy their love of the sport at the most prominent polo facility in the country. The 2019 Palm Beach Polo Season opens Sunday, December 30, 2018 and concludes 17 weeks later with the USPA U.S. Open Polo Championship® Final on the weekend of, April 20-21,2019. Polo matches are open to the public, with a wide range of hospitality and guest seating that includes elegant grandstand viewing, field tailgating, stadium seating, field-side champagne brunch at The Pavilion, and exclusive sponsor boxes. See more at www.internationalpoloclub.com. 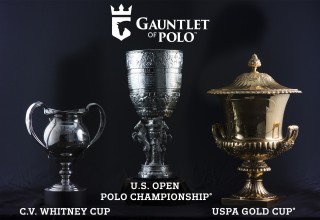 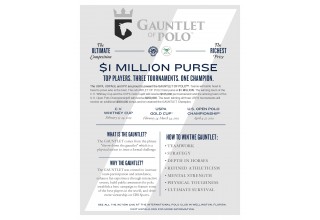