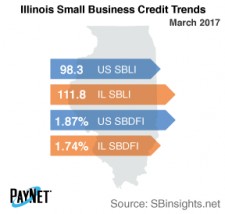 Chicago, IL, May 10, 2017 (Newswire.com) - PayNet, the leading provider of small business credit data and analysis for the commercial and industrial lending industry, reports that﻿﻿﻿﻿ in March 2017 overall defaults increased within small businesses in Illinois﻿, with default rates in 10 of the 18 major industries rising in the state.

"Despite the performance of defaults over recent months, lending appears to be turning up," says the president of PayNet, William Phelan.