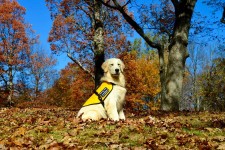 Madison, Virginia, August 3, 2016 (Newswire.com) - On  Friday, August 5, Daniel Salvato, age 11, of Godfrey, Illinois will be welcoming into his home and heart a Autism Service Dog, a Golden Retriever named “Wags.” The dog is being provided by Service Dogs by Warren Retrievers, a non-profit organization based in Madison, Virginia, with a mission to provide specially-bred and trained dogs for adults and children with invisible disabilities like Autism Spectrum Disorder, PTSD, Seizure Disorders, or in the case of Daniel, Autism Spectrum Disorder. Daniel’s dog has already received thousands of hours of training as Autism service dog and it will continue to learn under the careful guidance of a certified trainer from Service Dogs by Warren Retrievers and through the rapport it develops with Daniel and his parents Penny and Andrew.

At a very young age, just prior to his second birthday, Daniel was diagnosed with Autism Spectrum Disorder.  In the years since the diagnosis, he and his family have had to face the daily challenges associated with Autism.  Daniel has problems with communication and social skills, he faces anxiety and separation issues that limit his independence and is challenged when transitioning into new situations. And like many children diagnosed on the spectrum, all these issues combine to disturb his sleep patterns and even keep Daniel from being able to sleep alone.  Another fear for Penny and Andrew is elopement and wandering—another very common Autism trait.  “This service dog would help Daniel by being his friend and companion,” says Penny, “and knowing that Wags is trained to keep Daniel safe from wandering adds another layer of protection and peace of mind for us.”

New scientific research studies into Autism therapy provide positive evidence of the difference a service dog can make.    Dan Warren, Founder and President of Service Dogs by Warren Retrievers, states, “The studies showed children were more talkative and socially engaged when their service dog was present.  Children were less aggressive and smiled more frequently when around their service dog.”  And, one of the main goals when training an Autism service dog is the need to keep a child safe; when the family goes out, the child will be literally tethered to the dog to keep him or her from running off or getting hurt.    According to Mr. Warren, “the studies further found that safety aspect was a huge relief for families as parents’ anxiety over their child can lead to social isolation.”

Now with the arrival of the “Wags” and Daniel and his family will have yet another tool, a four-legged one, that has received foundational training to assist Daniel to live a more happy, safe and independent life.

Wags will work with his handlers, Penny and Andrew, alongside the SDWR trainers towards public access training and certification.  Dan Warren is quick to point out that, “all the incredible services these dogs can provide are through progression, hard work and dedication of the organization and the family who must work together to build on training foundations and fundamentals.  This is about an 18-month training program.”   But the hardwork will have numerous benefits as Wags will be able to accompany Daniel everywhere—from school, to stores, doctors’ officers and even hospital stays.  “All of our dogs are fully covered under the Americans with Disabilities Act,” says Warren, “so Wags will always be right beside ‘his boy’ Daniel.”

What sets SDWR apart from other nonprofit service dog organizations are the customized training methods and SDWR matches dogs to their “person.”  According to Dan Warren, “that important bonding time between dog and person can begin to happen right away.  For the seven years we’ve been utilizing this method of dog placement, we’ve achieved amazing results.”

As many one in 68 children are diagnosed with an Autism Spectrum Disorder in the U.S. each year. “We wish we had the funds in place to give a dog to every child who wants a beautiful little companion that can also serve as an amazing Autism management tool.  Many others are waiting to receive their service dog from Warren Retrievers,” says Dan Warren, “Contributions are vital to our mission which is ‘until the puzzle’s solved, there’s a dog.”  Donations can be made by going to www.sdwr.org for the many others who are waiting for their service dog.