IFPG Franchise Summit Expected to Be No. 1 Virtual Franchise Event of 2022 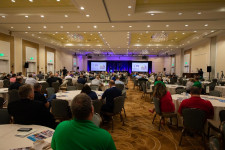 This is the third virtual conference for IFPG. The first one was originally launched when IFPG's annual Retreat was postponed due to COVID-related restrictions. The company's founder Don Daszkowski admits that, prior to COVID, he never considered holding a virtual conference but, after the success of its first-ever Virtual Retreat held October 2020, IFPG's team decided to continue offering similar events. "There is definitely a place for both in-person and virtual franchise conferences," he says. "Nothing will fully replace face-to-face conferences, but COVID-19 taught us that virtual events have a lot of value and are a great way to get together throughout the year without having to travel."

The two-day IFPG Franchise Summit will feature expert panelists, speed networking, breakout sessions and a special guest speaker who has yet to be announced. "The timing couldn't have been better with the current rise in COVID cases. The format echoes our in-person events, but is more convenient since there is no travel involved,"  Daszkowski says.

The franchise broker network's 2022 calendar is filled with events meant to build relationships between its franchise consultant, franchisor and vendor members. This past October, IFPG's annual Retreat at the Margaritaville resort in Hollywood, Florida, brought almost 500 IFPG members together to collaborate and share best practices. "Whether they are virtual or in-person, our No. 1 goal is to make our events more memorable and productive each time. We're never satisfied with the status quo," says Daszkowski. Registration is now open.

The International Franchise Professionals Group (IFPG) is a membership-based franchise consulting network with more than 1,200 franchisors, franchise consultants and vendor members. Together, IFPG's members guide aspiring business owners through the process of identifying and investing in franchise businesses. IFPG's purpose-driven mission is based on integrity, ethics and collaboration.