IEC Announces Winners of 2018 Apprentice of the Year Competition 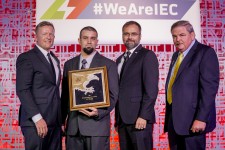 ALEXANDRIA, Va., September 27, 2018 (Newswire.com) - The Independent Electrical Contractors (IEC) hosted the 2018 Apprentice of the Year competition during its IEC Convention & Expo 2018, September 19-22 in Indianapolis, IN.

During the competition, contestants:

This year, 21 contestants participated in the competition. The 2018 IEC National Apprentice of the Year Competition contestants were:

For more information on the competition visit, https://www.ieci.org/iecconvention/aoy.

IEC National is a nonprofit trade association federation with 52 educational campuses and affiliate IEC local chapters across the country.  IEC represents over 3,300-member businesses throughout the United States and educates nearly 12,000 electricians and systems professionals each year through world-class training programs.  IEC contractor member companies are responsible for over $8.5B in gross revenue annually and are composed of some of the premier firms in the industry.

The mission of IEC is to enhance the independent electrical contractor's success by developing a professional workforce, communicating clearly with government, promoting ethical business practices, and providing leadership for the electrical industry