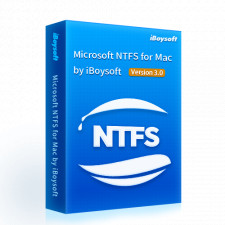 Apple officially released macOS 11 Big Sur to the public on Nov. 12, 2020, following the shipping of the first M1-equipped MacBook Air on Nov. 17, 2020. The two events have marked a significant transition in Apple's personal computer lineup that the company determines to move forward to integrate macOS into its tech ecosystem, most importantly, with its own silicon.

iBoysoft NTFS for Mac version 3.0 adds more NTFS writing functionalities. Users can have immediate permission in Finder to alter the name of an NTFS volume, to tag NTFS files, and to AirDrop NTFS files. Files from network drives and cloud storage can be downloaded to NTFS volumes seamlessly.

iBoysoft NTFS for Mac version 3.0 grants full and stable read write file privilege to NTFS-formatted hard drives and solid-state drives, especially to those having physical sector size are 4096 (4K) bytes. It eliminates the maximum of 60,000 files that can be moved in and out of an NTFS volume and supports unlimited file exchange. The two improvements make the software well suited to today's large capacity drives.

iBoysoft is a dedicated software development company focusing on data recovery and utilities for Windows and Mac.