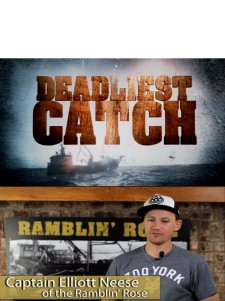 ROSARITO BEACH, MEXICO, June 2, 2016 (Newswire.com) - The Emmy-winning Discovery reality series returns March 29 for its twelfth season with a two-hour premiere.
Deadliest Catch will be short one regular cast member this season. Captain Elliott Neese (60 episodes, 2011-2015) has been a big part of the series whether fans like or hate him. Nonetheless, he’s a polarizing figure on the show who interests viewers.
Season 11 for Elliott was fraught with his addiction issues before millions of viewers as they watched him unravel and clash with a member of his crew.
In an exclusive interview with Elliott Neese of Deadliest Catch, the captain of F/V Saga gives an update on the progress he’s made since rehab and why he won’t be on Season 12 of the hit Discovery program.
While Season 11 of Deadliest Catch was airing, Elliott entered rehab at Passages, a treatment center in Malibu. He completed 60 days there in May 2015
Since then he has relapsed and is now going to undergo treatment with Ibogaine, a natural plant medicine from Africa known for its amazing anti-addiction properties at Genesis Ibogaine Center in Mexico.
What about appearing on Season 12 of Deadliest Catch? Elliott Neese reveals that he won’t be on the show except for a few times..
“I won’t be on this season because of what I have to do to get better,” Elliott explained. “I will be on a time or two, but not all season. I’m going to talk to Discovery about getting on season 13, but I want them to tell my side of the story.”
Elliott says Saga will have a different captain commanding it in Season 12.
“I have my boat out and a crew will be on it. I won’t be on it and neither will my dad,” Elliott said. “He basically was on there to hang out with me. A TV captain will be on the show — Jake Anderson. The real captain won’t be seen on the show.”
Elliott’s father, Mike Neese, has been on the Saga during the last few seasons of Deadliest Catch. The father-son duo have shared a special bond, but right now, their relationship is a bit on the strained side after last season.
Neese is a self-described “villain” on the series of Deadliest Catch. He told Boating Magazine in January 2014 that he doesn’t mince words, and, on-camera, this may not always rub viewers the right way.
“I tell it straight. I don’t appease the camera, and maybe that doesn’t always come off right,” Neese said. “But remember, reality TV isn’t real. It’s entertainment, that’s it.”

"As a leading provider of Ibogaine treatment, we take pride in offering the best professional care. We are dedicated to serving the needs of our patients each and every day. The Genesis Ibogaine Treatment Center offers a fully staffed and licensed, state of the art medical facility. Our calm setting will assist you in meeting your needs so you can follow through with your decision to change. It's an environment supported with the efficacy of Ibogaine."

We are the only licensed Ibogaine clinic and treatment center in Rosarito Beach, and Baja Mexico.