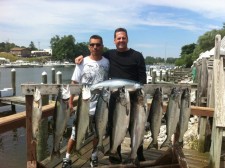 Trenton, New Jersey, June 29, 2017 (Newswire.com) - As fishing tournaments go, the National Federation Tour (sponsored by Cabella’s) is probably the most recognized. In fact, when Ian Robert Nelms competed in the competition last year, he did a terrific job by managing to place within the top 100. "It's the best of the best in the Walleye Fishing Tournaments," said Nelms when asked about his valiant efforts.

It’s not just Ian Robert Nelms who managed to fare well during the tournament, though. The Bays de Noc, Escabana-based event was welcomed by an absolutely glorious day of sunshine. There was a great turnout for the day, too, with the organizers touting over $200,000 in cash prizes for enthusiastic anglers.

"It's the best of the best in the Walleye Fishing Tournaments."

In total, there were 240 teams which entered the tournament for its fifteenth successive year. Lara Herboldsheimer, co-director of the tournament, was full of praise for the host town. "This is our third time in Escanaba; it's just a great community,” she said during a recent interview.

“They welcome us with open arms. It's a great fishery. It's a great place to come and be a part of the walleye community." Alongside the generous cash loot, there were also two magnificent and top-of-the-line ranger boats which could be won by entrants. Not only that, but Cabella's also did a magnificent job of organizing a selection of fantastic food stalls manned by chefs from many different disciplines, alongside a flea market and a kids’ fishing derby, ensuring that there was something for everyone to do on the day.

In one of the next Cabella’s events — which took place in Wisconsin — it was two seasoned locals who managed to surprise everyone by placing first. In fact, it was by targeting the shallow weeds about a mile from the launch that Buck Gehm and Louie Apitz managed to bag their winning 46 pounds, 2-ounce total. "It's pretty surreal to win a big tournament like this," Apitz said following their big win.

"The MWC is the top of the line in team trails and our favorite one to fish," Apitz added. Gehmz was similarly surprised: "I didn't think we'd be able to pull it off. We couldn't put a program together targeting big fish on the mud, so we ground it out fishing the tops of shallow weeds about a mile from the launch."

Cruising at 1.4 mph over eight to eleven feet of water for most of the time, the duo focused on pulling perch-colored hatchet and willow leaf spinner rigs. As you might expect, it was hardly smooth sailing getting by in those conditions; the team regularly had to pause to check their blades for weeds, and bait lost to small fish had them frustrated. Nevertheless, they persevered on, confident that their strategy would allow them to do well in the tournament.

"Constantly bringing in one line after another was part of the deal," said Gehm. "There were a lot of small walleyes, along with perch, pike and sheepshead," Apitz continued. In fact, on day two, the team managed to get through thirteen dozen nightcrawlers. "We made a rule that nothing under 25 inches was going into the livewell. We got a little nervous this morning, but stuck with it and things worked out." And work out they did! The team claimed over $14,500 in cash prizes when all was said and done; this includes the $10,000 first-place cash payout, as well as the $1,000 Ranger Cup contingency fund and a $500 bonus courtesy of Lowrance Electronics.

As well as the money, they took home a 750 auger attachment package with drive unit, 12-inch diameter auger, mounting accessories and hose kit worth over $2,000, thanks to tournament sponsor Lowe Equipment. Additionally, as the competition winners, they also won the $1,000 Cabela's National Team Championship Prize Package including paid entry into the 2017 NTC, travel stipend, team jerseys and plaques.

Even better than all that, for the modest team of Apitz and Gehmz, is that they can now also claim to be the official Wisconsin State Walleye Champions; since the tournament is designated as the “State Championship Qualifying Events”, both men now have supreme bragging rights during any banter with their fellow anglers. Cabella’s tournaments are attracting veterans and young hopefuls alike, and the results prove that you should always expect the unexpected if you go along to watch the events!