I Smell A Rat: World's Largest Salad Producer Continues To Allow Rodents In Their Salads 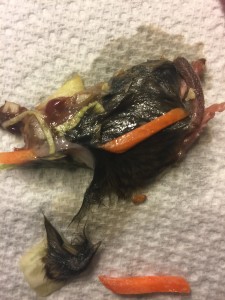 Lynchburg, Virginia, April 17, 2017 (Newswire.com) - ​​​​​​​​Just days after Fresh Express voluntarily recalled the Organic Marketside Spring Mix salads after two people discovered a dead bat in the product, a family of three in Virginia, with the help of Relevant Law, is filing a federal lawsuit against Taylor Farms, the world’s largest producer of fresh cut salads and vegetables as well as Sam’s Club, a wholesale club owned and operated by Walmart, after the family discovered that they were munching on the remains of a chopped-up dead mouse that was in their Asian Chopped Salad Mix they purchased at Sam’s Club in Lynchburg, Virginia.

According to the civil complaint filed by Relevant Law, Mrs. Sarah Barber purchased two bags of the salad mix and prepared a family dinner. The complaint adds that Mrs. Barber poured the salad mix into a large bowl and added the Asian dressing, not noticing the shredded decapitated mouse, including organs and other several large body parts.   After the three sat down for dinner, and nearly over half way through the salad, Mrs. Barber noticed something on her plate mixed within the salad that looked like a small reddish jelly-like object, an item that was clearly not part of the salad mix.  Looking more carefully she noticed another dark grey hairy object and immediately notified her husband who suggested it looked like part of a mouse.  Mrs. Barber’s husband searched through the remaining salad, discovering more fragments, and found the remains of a mouse.  The entire family was immediately horrified and traumatized by the incident, becoming nauseated and seriously ill and continue to have a serious physical and psychological food aversion to salads.

"Taylor Farms has a disturbing history of repetitive examples of negligently allowing life-threatening diseases and rodents into their products."

The lawsuit was filed to seek recovery for damages, including punitive damages against Taylor Farms for gross negligence and willful disregard of the safety of the family and to bring this health and food safety matter to the public’s attention.  The complaint also includes breaches of implied and express warranties.  The Asian Chopped Salad Mix bag expressly warrants that it is "Washed & Ready to Enjoy!".

“Taylor Farms has a disturbing history of repetitive examples of negligently allowing life-threatening diseases and rodents into their products,” said Mark Bold, Managing Attorney and CEO of Relevant Law. “We reject their argument that consumers should periodically expect to have rodents, e-coli, or listeria as part of their meals,” “With today’s technology, Taylor Farms has absolutely no excuse in not preventing shredded mice from landing on the plates of hungry families.”

In 2013, the New York Times reported an outbreak of illness involving hundreds of people in 22 states, and noted that Taylor Farms “had an unusual number of voluntary recalls for potentially tainted products” (See: http://www.nytimes.com/2013/08/30/business/taylor-farms-big-food-supplier-grapples-with-frequent-recalls.html).  In the same report, Bruce Taylor, CEO of Taylor Farms, defends the unusual number, claiming his company’s recalls are small compared to others.

“Taylor Farms may have fewer recalls compared to others, not because their food supply is not getting contaminated, but possibly of their desire to control public perception.  It appears that most of the Taylor Farms voluntary recalls are only the result of the major publicity of a life-threatening outbreak,” said Bold.  “Unlike Fresh Express, who voluntarily recalled its salads after a bat was discovered to ensure public safety, Taylor Farms has had a cavalier attitude and trivialized this safety matter. They’ve basically given our clients the middle finger. Whether its salmonella, a bat or, a mouse, the concern of public health and safety should be the same.” Bold adds, “Taylor Farms seems more concerned about public image than public health.”

Several stories involving Taylor Farms that have been made public recently, include:

• In September 2012, an Orlando woman found a mouse in a bag of Taylor Farms salad.

• In 2011, 2012 and 2013, according to the New York Times, Taylor Farms issued three recalls each year for potential contamination with e-coli bacteria and intestinal parasites.

• In May 2016, a salmonella outbreak was reported as a result of Taylor Farms Organic Kale Medley Power Greens sold at Sam's Club. Taylor Farms did not recall its product, and failed to inform the public, until another company announced the outbreak.

o Bill Taylor, CEO of Taylor Farms responded, "The FDA is not requiring any action from Taylor Farms and we are not issuing any formal recalls."

o As a result of the salmonella outbreak, Douglas Powell, a former professor at Kansas State University's Department of Diagnostic Medicine / Pathobiology, rebuked Taylor Farms for their decision not to voluntarily recall unsafe product: "The situation fits the pattern," Powell told Food Safety News. "There's a question of public health. I don't care that the product's not on shelves any more. The public has a right and need to know about these incidents."   (See: http://www.foodsafetynews.com/2016/05/secret-outbreak-investigation-targeted-packaged-salads-in-april/#.WPT34tIrKUl)

• On December 2016, Taylor Farms was forced to recall turkey meatloaf due to ingredient labels with incorrect ingredients which failed to disclose potential allergens in the food.

“Diseases and rodents are not mutually exclusive and separate from each other,” explains Bold. “Many of these diseases can come from the feces, urine and bodily fluids of animals, let alone whole mice, which are clearly making their way into our food supply,” said Bold, adding that it’s “entirely unacceptable.”

Retailers also have a responsibility to ensure the product that they put on their shelves is safe for consumption.  Retailers and restaurants should be alarmed that life-threatening diseases, rodents and other creatures are making their way into the food supply, which can make them legally liable as well.

Relevant Law is a full-service law firm based in Lynchburg, Virginia. Relevant Law is on a mission to redefine the legal experience. We are a group of passionate experienced lawyers and business professionals busily introducing fresh ideas to a tradition-bound profession. We deliver high quality, efficient, cost-effective, on-demand innovative legal solutions to our clients.

Relevant is a law firm in Lynchburg, Virginia that is deeply committed to serving individuals and businesses with focused and sophisticated legal work. We offer a range of services to help our clients address their legal needs.