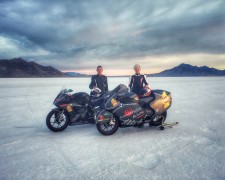 With improving track conditions over the week, the team was able to set records early, then progressively improve them over the event. Ultimately, Sills piloted the Alpine Performance Centre-built BMW S 1000 RR to 237.287 mph to earn the FIM kilometer record in the faired, naturally aspirated 1000cc class; a record that was previously set in 2014 by her late husband Andy Sills, also of Hunter Sills Racing, at 221.863 mph. Erin was later able to improve her own FIM mile record set in 2018 on the Uyuni Salt Flats in Bolivia at 229.265 mph, making the new mark 236.889 mph.

"After the poor track conditions presented by Mother Nature during Speedweek, we were looking forward to seeing how our bike would perform on a better course,” said Sills, rider and owner of Hunter Sills Racing. “Shane Kinderis of Alpine Performance Centre put together an incredible motor which performed beautifully with the Wizards of NoS nitrous system. I also found the AirTech fairing to be incredibly stable and grounded at speed.”

“Our senior race technician Curtice Thom worked alongside Shane Kinderis again, a pairing that has proven to be very successful over the years. They did an excellent job of keeping the bike in peak performance, and I'm very pleased with our results. As always, we owe a great amount of success with this project to our many technical partners,” added Gary Orr, owner of San Diego BMW Motorcycles and Hunter Sills Racing team member.

Richter, known previously for his “Race For Relief” charity effort World’s Fastest BMW GS (http://huntersillsracing.com/race-for-relief-2018/), also saw much success in his first event racing the BMW S 1000 RR, winning back a record the team lost in Bolivia in 2017 to Nick Genet. Richter increased the FIM and AMA 1000cc naturally aspirated un-faired (“naked”) mile record to 195.674 mph and the FIM kilometer record to 196.206 mph.

“Riding the over 275 horsepower motorcycle without a fairing presents a unique physical challenge, but the team gave me a bike and suspension set-up that enabled me to reach my goal of earning World and National records in my first event,” said Richter.

Hunter Sills Racing is also proud of its contributions to the Bonneville Motorcycle Speed Trials racing community during the week. With the express permission of the Bureau of Land Management, the team built and donated a mock “Bonneville Salt Flats” sign which was installed at the entrance of the Salt Flats for the week-long event. Following the event, HSR auctioned the sign, earning $4,000 to benefit a fallen rider who needed help with medical bills. Erin Sills also continued her Shemoto Scholarship, awarding $2,000 to the Buell Sisters team of Ashley Woodford.

The next event for Hunter Sills Racing will be in support of the Women Riders World Relay, a year-long around-the-world journey of over 10,000 female motorcyclists. Erin Sills will participate in the WRWR’s United States relay Oct. 2-12, 2019.

San Diego BMW Motorcycles is San Diego's premier motorcycle dealer and one of the largest volume BMW dealerships in the U.S. Enthusiasts serving Enthusiasts in the sport of motorcycle racing.

Alpine Performance Centre, located in Victoria, Australia, has a long relationship with BMW building performance engines and bikes for World Superbike, domestic Superbike and land speed racing, earning dozens of podium and first-place finishes over the past 10 years. 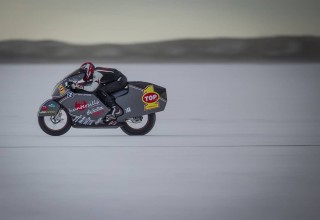 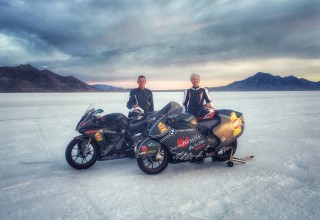 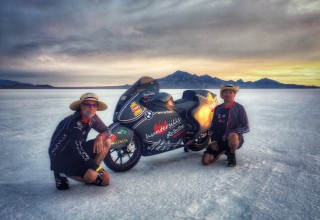