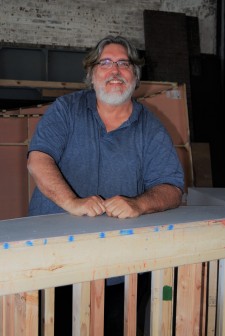 Cleveland, Ohio, April 13, 2017 (Newswire.com) - Hughie's Event Production Services is excited to announce the acquisition of the scenic production and lighting design resources of Dave Brooks. Dave has spent the last thirty years working as a Scenic and Lighting Designer, Technical Director and Production Manager. A life- long Clevelander, Dave attended Cleveland State University, where he returned, after an internship with the Berkeley Repertory Theater, as the TD for the newly renovated Factory Theater at CSU.

In addition to designing for the stage, Dave has expanded his repertoire to include corporate and special events as well. His work as a designer and fabricator has helped support meetings for such clients as Sealy, Applebee's, Nestle, Sea World, and many more. His background in both design and fabrication serves him particularly well in the corporate event market. The ability to have some insight into how a project will be engineered and built is vital to keeping both the project and budget on track.

30 years of shows and events can make it hard to pick favorites, but some of Dave's favorite projects would have to include the grand opening of the Akron Art Museum, the 2008 Presidential Debate in Oxford, MicroSoft, The Great GoogaMooga Food and Music Festival, and his work fabricating Studio C for the Fox Sportstime Ohio network.

Hughie's Event Production Services has been considered a premiere source of quality event production service and professional industry equipment in the Ohio and Western Pennsylvania region. With their regional offices in Cleveland and Columbus, Ohio and Pittsburgh, Pennsylvania, they are able to serve clients nationally as well as locally. The Cleveland office will be the home base for Dave's design studio.

As Hughie's business relationships have prospered, so has their reputation as a great company to work with. Hughie's has traveled world-wide, fulfilling a variety of event production needs for all types of clients. They have moved beyond "Audio-Visual" and have truly begun to focus on Event Production. They offer rigging, staging, lighting and décor services in addition to traditional audio and video.