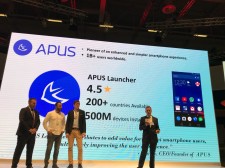 BERLIN, October 27, 2017 (Newswire.com) - Chinese mobile internet company APUS has been chosen as one of the initial developers to be featured on the new global Huawei AppStore, announced yesterday in Berlin. APUS is also the only Chinese app developer amongst the 15 developers showcased as part of the launch at HUAWEI ECO-CONNECT 2017.

APUS Launcher is a utility app that provides a one-stop solution for Android smartphone users to access the internet. It helps to organize your apps into various folders, such as Communication, News & Books, and Media, among other categories. It’s light and slick, and adds a bit of personality to your Android phone. APUS Launcher is the core product of APUS User System, a suite of products that includes APUS Launcher, APUS Know, APUS Discovery, Browser, news headlines, APUS booster and APUS Messenger Center, all designed to improve the Android smartphone user experience. Since its launch in June 2014, it has been downloaded hundreds of millions of times by users all around the world.

“It’s a big achievement for us to be selected as the only Chinese app developer by Huawei to attend HUAWEI ECO-CONNECT EUROPE 2017. In combination with Huawei’s outstanding hardware, we believe APUS Launcher offers a unique added value for Huawei smartphone users, by giving them the best user experience,” said Tao Li, the CEO and Founder of APUS Group.

Huawei AppStore offers a wide variety of top quality apps and games, with an average 4.3/5 Star Rating. Each app and game goes through a rigorous testing to ensure the highest quality. Only the best Family Friendly games and apps are accepted to the store. Huawei AppStore will be pre-installed on all Huawei and Honor phones. Global rollout will start from Q1 2018.

With a rating of 4.5 on Google Play and 500 Million users globally, APUS Launcher is one of the apps selected by Huawei. By the end of 2016, APUS’s suite of apps surpassed one billion downloads, serving people from over 200 countries worldwide.