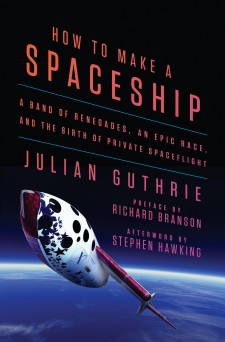 SAN FRANCISCO, CA, December 28, 2016 (Newswire.com) - In her thrilling new New York Times best-selling book, “How To Make A Spaceship,” with a foreword by Richard Branson and an afterword by Stephen Hawking, author Julian Guthrie chronicles the epic behind-the-scenes private space race spawned by acclaimed XPRIZE founder Dr. Peter Diamandis and supported by tech business mogul Anousheh Ansari and space pioneer Bob Richards. Their improbable dream of using an incentive prize to find and fund the team with the “right stuff” to build the world's first private reusable manned spaceship is a tale of making the impossible possible. In 2004, the bullet-shaped SpaceShipOne made history when it finally won the $10 million Ansari XPRIZE, became a permanent fixture at the Smithsonian, and led Richard Branson to buy the rights to create his own Virgin Galactic to pave the way for the coming $1 billion space tourism industry.

Now, based on overwhelming interest in her book and the response it has generated in private manned spaceflight, to celebrate her book's own meteoric climb up the charts, Guthrie will host a very special webinar on January 5th to “ring out the old, and ring in the new” – specifically, to explore what's next for these three legendary space pioneers, and delve into their plans for 2017. The free interactive webinar will mark the first time ever Diamandis, Ansari, and Richards will all share the same platform and be available for a follow-up questions and answers with space enthusiasts, reporters, and the public. Several “mystery” call-in guests, a raffle of treasured artifacts flown aboard SpaceShipOne into space, and additional surprise announcements are planned.

"Peter Diamandis' inspiring story...is one of passion and purpose."

Among the exciting topics this broadcast will cover will include:

- Award-winning journalist and author Guthrie will share eye-opening behind-the-scenes stories of her reporting and interviews for the book, and will talk about the lessons learned from readers' fascination with private space travel.

- XPRIZE founder Dr. Peter Diamandis will discuss his latest plans for his asteroid mining company, Planetary Resources. He will also provide updates on the status of the next Great Space Race - the quest to send and safely return a private commercial robotic lander to the Moon, being sponsored by Google, known as the Google Lunar XPRIZE. This next Great Space Race is referenced in a previously untold account in Guthrie's book.

- The world's first female private commercial astronaut and the first Iranian to visit the International Space Station, Anousheh Ansari, will share her story of why she said “yes” to funding the $10 million dollar XPRIZE when everyone else said “no.” Ansari's inspiring story will serve as a “launch point” to discuss the importance of getting more young women into space, and what she believes it will specifically take to get us not only to the Moon but then on to Mars.

- Bob Richards, a co-founder of Diamandis' International Space University and co-founder of the Google Lunar XPRIZE team Moon Express, will share fresh updates on his intrepid team’s progress, and discuss the bigger goal and importance of developing tourism on the Moon.

Space Israel co-founder Yonatan Winetraub will call in to share updates on his own team's progress in its race to beat Richards (and 14 other teams) to the Moon to capture the Google Lunar XPRIZE, which Winetraub remains hopeful he can accomplish before the close of 2017.

To commemorate this unique broadcast, a limited supply of bookplates collectively signed by Guthrie, Ansari, and Diamandis will be offered to webinar participants who are among the first to purchase “How to Make a Spaceship” from the date of this announcement through the conclusion of the broadcast. The signed bookplates – to go inside each book’s cover – will be mailed to purchasers within 10 days of the broadcast's conclusion. To ensure proper receipt, reeaders should send proof of purchase with their mailing address to Ella Caraker at ellacaraker@gmail.com.

Space enthusiasts who register before Jan. 4th will enjoy the additional chance to win rare pennies flown into space aboard SpaceShipOne on Oct. 4, 2004, the day the $10 million XPRIZE was won. The commemorative “space pennies” were flown as ballast aboard the world's first private manned spaceship and are considered extremely prized mementos from space (not for sale or resale). Three pennies will be up for grabs – each individually wrapped, each with a card describing the historic day's event. Three names will be randomly selected as winners of the space pennies at the conclusion of the webinar.

To learn more about “How to Make A Spaceship,” visit: http://www.howtomakeaspaceship.com

To purchase additional copies of “How To Make A Spaceship” please visit your local bookstore, or purchase online at Barnes & Noble, or at http://amzn.to/2dlvBgt

To learn more about Zoom, the multi award-winning, state-of-the-art online meeting and conference platform personally selected by the event's producers as the preferred provider of choice to host and cross-promote this special panel discussion, visit: https://www.zoom.us/about